Skip to content
I.  It’s Been A While
Hey, everyone.  How y’all doin’ today?
(Says the born-and-raised Upstate New Yorker–here you go, Downstate friends and strangers and people we have yet to meet:  another reason to think we’re all a bunch of hicks up here.)
Things have been busier than usual, which isn’t a bad thing, but the feeling of satisfaction from erratic productivity cannot be expressed in words.  The sense of being overwhelmed isn’t necessarily the greatest feeling, but the gratification from being and doing is fantastic.
There have been several different reasons to define or back up my absence from writing.  This Friday, the 1st of March, my beginner improv troupe will be participating in our first show. Granted, the show is only 15 to 20 minutes long, but it is the first time I will be on stage since seventh grade.  There is great satisfaction to share this moment with family and friends, as they watch, but the individuals I am working with is absolutely talented.  We all have different personalities, so clashing hasn’t been an issue.  We have strengths, and we have weaknesses.  The workshops and practices and time spent with them–Alexis, Danielle and Emily–and the sessions run by Joe and Mike, make this opportunity exciting on a number of levels.  The six-member group was narrowed down to four; and it is too bad Danielle won’t be around to participate in the show.
After all, we did want to participate in the Bank Show.  Now it’s time to shine.
There must be some last minute polishing, however.
II.  The Box
The lovely fake holiday known as Valentine’s Day showed it’s ugly, beat-red, heart-shaped face for the nth time, and–of course–the notion takes a toll on the all of the singles in the world, including those of us who don’t really give a shit.  It’s not that we don’t give a shit about love, it’s just the so-called holiday.  My philosophy, along with the rest of the We Don’t Give A Shit Club, is that we must tell those we love/care about that we do so on a regular basis–if not daily.  In my opinion:  a week missed is equal to one foot in the grave of Relationship Despair.  You’re digging your own, for your information.
I was going through old items in the crawlspace at my parents’ house, and I came across a faux book:  one of those boxes shaped like a book–I found mine at Home Goods (a.k.a. Marshall’s–they are separate!).  This was the first year alone after two consecutive years of celebrating.  We–she and I–didn’t get all mushy about it, but we did take a weekend for ourselves to get out of Syracuse.  We enjoyed Seneca Lake wine country’s Wine and Chocolate Weekend.  Remnants of those weekends, concerts, inside jokes, letters, cards, notes, coasters, various stubs, photographs, and other items to make the high points of the relationship tangible filled the box.
The box was quite weighted.  When you’re with someone who loves enjoying all aspects of life, it’s very tough to forget.  You have dreams of that person, about the cats with more than distinctive personalities, and about shared feelings and moments.  You realize that although whatever seemingly small city you are living in is actually kind of big when you don’t physically see each other for a year.  In this scenario, you hope they are doing well.
Even though the relationship is over:  if you don’t acknowledge them in some form or another, if you don’t get past/over the arguments, if you don’t recognize your mistakes, if you don’t boast the fact you were in love with them for an extended period of time, if you don’t acknowledge pain with pleasure…
…you’re a soulless bastard and you don’t deserve anything pertaining to love in the future.

I’ve got a soul that I won’t sell… and I don’t read postcards from hell.
– The Wood Brothers
IV.  What Keeps Me Going
I came across a blog, whose writer is named Meg.  Here blog, to simply state, can be found at The Wild and Wily Ways of a Brunette Bombshell.  I have been a frequent visitor to her blog, and I have to admit her work is helping me tweak this blog a little bit.  There is no way I am going to copy her style, but I value her blog as inspiration to keep me on the creative path I would like to be on.  I am going to snag an idea of hers, which I ran by her, and she thought it was nice that I would be referencing her in this post.  I do have to give credit where credit is deserved.
Her inspiration was taken from another blogger, Warsan Shire, whose blog can be found here. 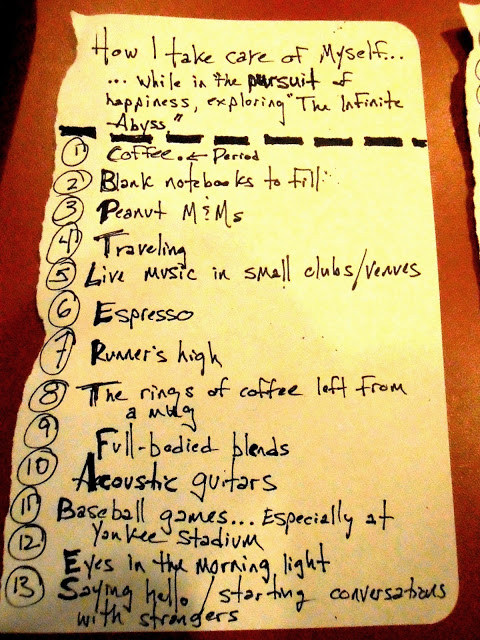 ﻿
V.  Postcards From Hell
I was hanging out with Mike and Erin early last week, and they asked if I was going to the Wood Brothers show at The Westcott Theater on Saturday, February 23rd.  As usual, I failed to take notice of another great show in Syracuse, but I quickly redeemed my ticket at The Sound Garden.
This Saturday was a typical Saturday in Syracuse:  there was way too much going on.  Emily and I drove out to Alexis’ place to practice improv.  Although, it was just the three of us, we did well.  We didn’t argue and our creative egos did not bump heads.  After three hours of practicing, we fizzled out, grazed on hummus and carrots and chips and truffles, and relaxed on the couch.  Buster, the dog, kept us company.  Downtown had Winterfest activities:  dining week and the martini walk.  Syracuse men’s basketball went head-to-head against our favorite rival, Georgetown.
However, the Malone Boys and a Mahoney had a show to go to.  When it came time for the concert, we headed to Alto Cinco for dinner, which was packed.  Mike got a burrito, Erin got a quesadilla, and I got a BBQ chicken quesadilla.  We opted to eat in front:  our food would come out in 45 minutes, and we would have had to wait over an hour for a table.  The guys were great, and our food came out fresh before the 45 minute mark.  As always, Alto Cinco hit the spot.  Mike and I gave a tip after the original tip, because the staff was working their ass off.
Support your local economy!
Erin was hoping for Chocolate on My Tongue to be played.  Mike opted for Tried and Tempted.  I rooted for Postcards From Hell.   They played my song!  I am a bit sad they didn’t play the other two songs, but the show was upbeat and fun.  People danced and sang.  We got our Magic-Hat-made Westcott Ales.
As we sat on the Manny couches, we took in the night and the weekend.  The time crept as we zoned out to a Kevin Hart comedy special.  It was a perfect ending for a busy day.

One thought on “A Soul That I Won’t Sell”