The couple, both people in their early 20’s, approached the door of The CNY Playhouse in Shoppingtown Mall.  The playbill for Brighton Beach Memoirs sat ready in my hand to be issued to the couple.  His eyes read of nervousness, giving off the impression that he was lost; she followed him, quieter than her date.  The cost was $40 total, and he handed out a $20 bill.  The three of us working–our eyes darted back, smoothly, to each other.  The young woman unfolded her hands, which fell to the front of her dress, to open up her purse and remove the remaining half of the cost.  This action occurred after she did a double-take, looking at her date to the bill and back to her date.  Their eyes had met.

They shuffled in through the door, and I showed them their table.

Returning to the welcome table outside the playhouse door, we three workers belted out a chorus of silence which echoed through the wing of the mall.  This action asked,  did that seriously just happen?  It’s hard to deny the dying chivalry when something like that happens.

We all live in a time where splitting the bill is not shunned upon; however, a woman enjoys being taken for a night out.  It’s safe to presume that they went to dinner beforehand–maybe at T.G.I. Fridays (I’ll hold that against them)–and then out for a play.  It’s better than going to see a movie, in my opinion.  However, young man, just because you paid for dinner it does not mean that she’s going to get you for the play.  If she makes the first movie, verbally or physically, you are safe.  However, for a great date night, you need to take the initiative and be ready to treat her all night, monetary and emotionally.

I have made that mistake before, but with after-dinner outing.  I had vowed never to do that again due to my feeling like an ass.

I haven’t watched a play in years, or so it seems, and–let’s be frank–the last one seen cannot be remembered, name or date.  It’s been a while.  The CNY Playhouse was looking for volunteers for the closing show of Brighton Beach Memoirs on Saturday (April 27th) night, and being compelled to help out.  Normally, I would go to the play by myself, but the lack of gumption to do so prevails.

First thing’s first. To find out the upcoming shows and prices, please visit the CNY Playhouse website and Facebook page.  You can subscribe to receive updates for future shows and events via email.

Brighton Beach Memoirs–I am not going to get into the detail of the plot since I’m confident you can look it up yourself–was reassuring.  It may or may not have encouraged me to consider trying out for plays.  Aside not having acting experience, it’s not a bad idea–in my opinion; however, it’s worth a shot should I decide to step out of my comfort zone.

Improv is generating confidence; and I cannot wait to keep performing.  The next performance is May 4th at 8, and it will be our Level 2 participants who will be participating.  I’m curious on how this will turn out; it will be the core troupe with added friends, performing long form improv.

Our workshops are taking place at the Solvay Tyrol Club, and we are grateful about their allowing us to practice there.  Including Ron, our instructor, I believe there are 10 of us; half of the people moved up from Level 2, and new faces have come on board.  Our group is full of biblical-related names, which is fascinating and humorous at the same time.  However, after one workshop, it’s clear to me that we have a great group.  Everyone is wanting to be in it to win it.  The few activities and excercises performed has illustrated that we are on the same page in regard to willingness with give-and-take.

Everyone seemed to enjoy the space, but this was personally uplifting to me.  Having a Tyrolean or Northern Italian heritage–my grandfather used to say that we were not Italian due to its inclusion–this club was the gathering of family and friends throughout the years.  My grandfather was a part of the choraliers, and he is featured with the group–a framed photograph, hanging on the stage wall.  It’s not difficult to believe that I was performing/practicing on the same stage that he performed on.  It’s reassuring.  The decision to join the Syracuse Improv Collective workshops and progress has been proven vital to my life.  The individuals and experiences had can only add to life being delicate.

Ron, who is incredibly experienced in improvisational theater, is already proving to be an incredible teacher.  The foundation that both Mikes have presented in Levels 1 and 2 and the input from Joe had been nothing short of crucial.  We are lucky students.

My writing is flourishing due to this.  Focus has been critical with relationships and plot, and the richness can be observed with each sentence put to the paper.  The story, raw, may not be that great, but everything is a work in progress.  The meat is there, but there is much more to the meal; everything has yet to be prepared.

After the performance of Brighton Beach was finished, I helped take apart the set with the actors and crew and other volunteers.  It felt rewarding, and if the opportunity to take part appears there will be no hesitation on my part to volunteer again.  The theater may be small, but the tight bonds is what attracts me to help out.  I enjoy being a part of something that is important to others.  I enjoy showing that I care even when there are no direct ties to me as an individual.

Friday was another defining day.

You are probably wondering why a link to Friday (the movie) is included in the post.  It’s suggested by WordPress, and my resistance was futile.

[As a side reference, that partial quote is legitimate.  It’s like a meatball to the spaghetti.]

Minimizing lunch for the sake of timing was great.  I ventured to Empire Brewing Company to meet-and-greet fellow Twitter folk:  Kate, Mel, and Stacey.   It was nice to put faces to handles, to talk with them, and to generate and build more of a community-based network.   My meeting lasted for about fifteen minutes, so I missed other people, but there is always next time.

At a work event, I was able to rehash the past with people who went on the Greater Syracuse Chamber of Commerce trip to China, which was back in 2008.  They were asked by a certain individual if they recognized me, which they had, but it was a foggy recollection.   When the trip revelation had been mentioned, they were all surprised and happy to see me.  My boss then asked me about my trip, which made me appreciate my travelling.

Another trip to Empire Brewing Company was in store for the evening.  I met up with my improv troupe and others for an evening out.  My Marriage of Figaro opera-bound mother and her friends were at Empire as well, but that wasn’t known until the following morning.  Usually, we are observant; however, she would have never thought to watch patrons coming in, and I was on a mission.  Despite my not wanting in a suit, everyone dressed well and in good spirits.  Our artistic fevers and personalities mesh well, so an expectation for a boring evening was nowhere in sight.

Laughs erupted, totaling more than real words; the exchanges were clutch and words to count.

Appletinis to decorate the table: a result of joking around, which turned into a serious idea.  The waiter’s allusion to Scrubs coincided with my bringing the topic up.

We kept the rest of the evening safe, and headed hope early.  We had improv workshops the next day. 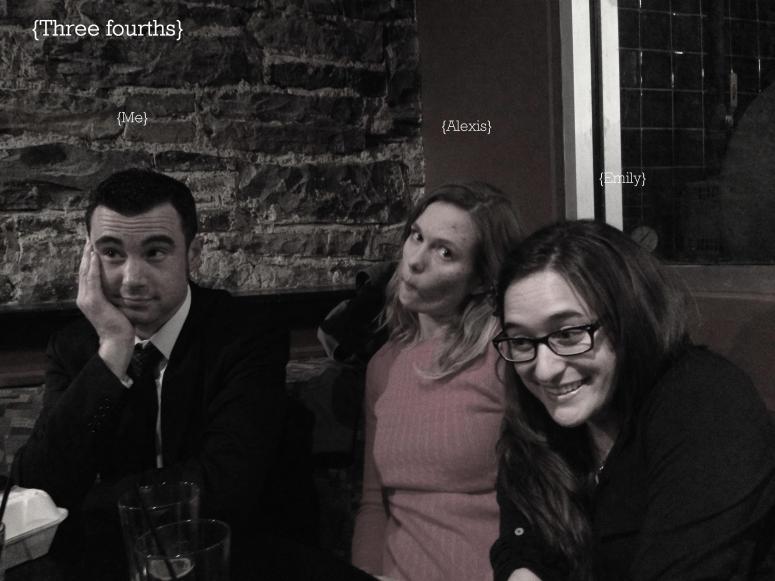 Coffee shop Sunday Funday was at hand.  After picking up a quick breakfast sandwich from Wegmans (and a double espresso), Freedom of Espresso was on my mind.  The beautiful weather made it a perfect day for shorts and sitting outside in Franklin Square.  My grande coffee sat proudly, and savored.  It was me and the computer, my thoughts, and the relaxation which was to ensue.  Keep in mind, this wasn’t the maximum relaxation.  A massage is up in the rankings, and a day-at-the-beach/book-by-the-lake are up there as well, but nothing would beat a massage on the beach while you are trying to read a book, which eventually slips through your fingers to the sand.

Sunday was a fantastic day to take a trip out to Skaneateles Lake.  A new friend and I headed out there for coffee and a hot chocolate, a stroll down the pier, and a bite at Bluewater Grill.  It was such an inevitable moment to have.  Despite the water’s choppy surface, the serenity prevailed.  Everyone else was doing it, after the lead that we started at that moment.

It was good to stay out and about and enjoy the scenery.