This was supposed to be published over a week ago, but life and writing fiction got in the way.  After finishing this post, I realized how crappy this entry really is.  Hey, they cannot all be winners.

I have to toot my own horn as keeping the designation of Best Dressed in Turbo Bocce, which had been originally acquired from last year.  There is a picture tagged on Facebook–tagging makes everything official.  Driving to Onondaga Lake Parkway straight from work helps as well; the option to change at work is available, but why should one waste time when one has to play bocce?  Comfort isn’t everything… actually, it is.  You’re tossing or rolling balls, being and feeling comfortable–as different as they can be misconstrued–is important.  Frankly, wearing a fashionable outfit isn’t a bad thing.  Even last week, I had a cardigan–it was cold–and a button down shirt.  No tie had been knotted, but a statement was still made. 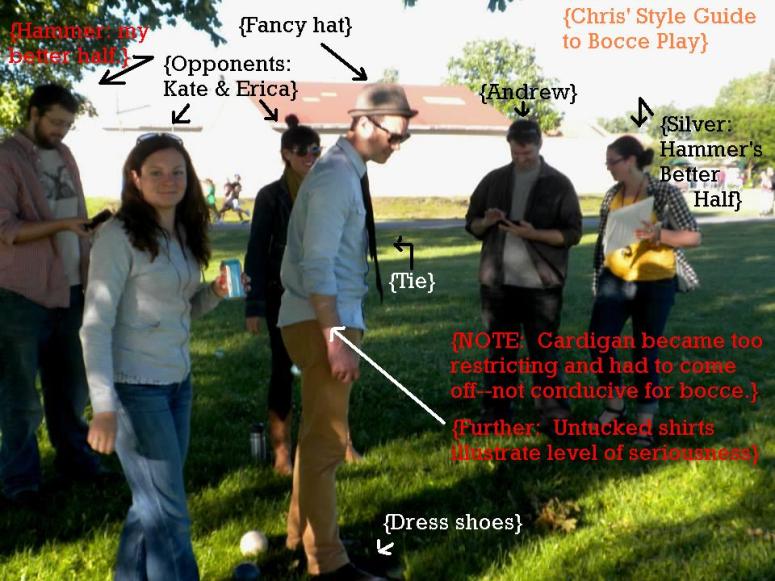 Yes, I love that hat, which answers your question… or concurs with your observation.  To make the record clear, all photos used are courtesy of Paul or Jim and the Turbo Bocce franchise.  The writing was added by me; so, yeah, this technically would be defacing property.  They’ll get over it.

Tuesdays, which were once my least favorite day of the week, are now changing and turning into the busiest day of the week.  Bocce and improv take place after work, and their time slots are now overlapping.  It’s frustrating due to my love of both; however, it’s possible to make both work.

Opportunity Knocked, however; Kate and Erica–their team name is When Opportunity Knocks (or something along those lines)–rolled really well, kicking our ass in the second and third games, and the latter was a shutout.  Yes, Jim and I lost to women.  It’s okay though.  Unfortunately, our record after last week sat 3 – 3, but this is the beginning of the season.  Jim, a.k.a. “Hammer,” and I shouldn’t be too worried.  With his being tired, we took the night off (June 11th), so we’ll make up games later on.

On Monday, June 10th, Paul asked us bocce folk to participate in a CNY Central segment.  The link to the segment can be found there, and lovely shots of my backside.  According to a Facebook comment, my pants are deemed “nice.”  Take that Kardashians; look who’s styin’ now.  Anyways, NoExcuses, Syracuse Guru and Turbo Bocce are all combining forces for a June 22nd Syracuse Bocce Blast event at Pine Grove Country Club in Camillus.  The cost is a mere $15 for the entire event.  Follow the previous link to register.

In improv news, an audition was held on Saturday, June 8th, at the CNY Playhouse for the next house troupe for the Syracuse Improv Collective.  The setup was just like a workshop:  we performed many two-person scenes, but we had an audience of seasoned improv actors critiquing us.  There were many familiar faces in the audition, and there was one new face; Gabe was a great guy to work with.  It’s amazing how I have acquired this ability to be able to jump on stage and crank out a scene with a stranger.  We generated an entertaining scene where I played a neurotic patient about to have his tooth pulled.

I’m not one to showcase talent, and the last time I attended an audition was in the 7th grade.  I graduated in 2001, so you do the chronology and math–I don’t like to do either.  There was no way I would sing in front of others, but Ron forces me to, but it’s around the confidence of a small group.  Karaoke is still a no-go in my life; it’s bad enough that watching others (attempt) singing gives me agita.

And people say there is nothing to do in Syracuse?

The past two family dinner Sundays were spent with extended family, and minus my consistently busy brother and his better half.  A copious amount of food had been consumed, and we topped off our night with dessert and games:  aggravation, Trivial Pursuit (20th Anniversary Edition, the 1960’s edition, and the Canadian supplemental cards), and Scrabble.  I came in third (out of five people) for both games of Scrabble.  I actually played well in Trivial Pursuit, the 1960’s and 20th Anniversary version, but not at the Canada-favored supplemental cards.  If there are any questions for the 1960’s version, regarding certain questions, please take note:

[Audience member]  Wait.  Really, Chris?  A board game is like a fine wine?

Before you interrupted me, the term that was planned to be used was blend.  It’s a blend of various games that we’ve played for years.  It’s a favorite game of mine, and the version at my parents’ house is decades upon decades old, and the marbles have been replaced.  The first game was played conservatively on my part; I did not aggravate my opponents, because of the karma rule (in life).  The first game ended in a loss.  There was a change of heart on my part for the second game:  I played like an asshole, knocking people back to the start position and relishing in my steady pace with taking the lead.  As the self-proclaimed antagonist of the game, I proved that bad guys win on occasion or evil triumphs.  Evil triumphing is a bit of a stretch, but my victory made the notion pretty obvious.  Gloating was allowed, because I said it was.

I even got a hole-in-one on a hole in mini golf earlier that day.  I did a victory dance, which made the kid behind me super jealous.  He ratted me out, so I had to by the clubhouse at Big Don’s Wild River Mini Golf a round of slushies.  It’s all a part of the mini golf etiquette.  Tracy was there, she’ll vouch for me.  Hands down the best hole-in-one dance ever.

She’ll only get that last line.  I went on a Dashboard Confessional tirade over a Flying Dog Classic Ale.

Back to writing some fiction!

4 thoughts on “Opportunity Knocked Us Up”