I love the suburbs.  I love the city, but the benefits of living in the suburbs is something experienced the majority of my life.  Living in the neighborhood that we had, there is nothing one would really want to change.  There was one main road, which was occasionally busy.  Aside that, we–the kids of the neighborhood–had free reign.  We could go practically anywhere in the vicinity of the neighborhood and be fine (with our parents).  My brother and I had to be within earshot when it came time for dinner (a prompt five o’clock), or on Saturday evenings around four (our family went to evening mass, which started at either five).

It was usually after dinner when we gained a second wind.  Most of the energy burned off occured between 8 and 10:  when the world goes dark.  Depending the availability of friends, our coalition would have to decide what game(s) to play:  Olly Olly Oxen Free, Ghost in the Graveyard, Flashlight Tag, or Run the Bases.  The latter would be played when few girls were around.

Almost the entire neighborhood of kids would show up at the same lamp post to play.  Aside my brother and I:  Dan and Laurie, Steve and Jim (once Jimmy and sometimes with garage door opener in hand), Jaclyn (to a certain point–moved away), Steph and Rich (to a certain point–moved away as well), Elliot (my childhood friend who also moved away), Katie and Corey, Dan, Ryan, sometimes Rocco and John, and sometimes Kate and Elizabeth.  We occasionally hung out with the kids on southeast side of the neighborhood, but not usually in times of games.

Olly Olly Oxen Free, Ghost in the Graveyard, and Flashlight Tag are all similar–all are bastardizations of tag and kick-the-can concepts.  We had our rules, which were easily broken–you cannot see (much) in the dark.  We devised reprecussions, but never followed through.  No one lost any appendages, but we did suffer scraped skin at times, and I ran into someone–I think it was John–who suddenly stopped; running into him caused me to break my finger.  Let’s not forget the grass-stained clothing our parents had to take care of.

The rules were simple for Flashlight Tag and Ghost in the Graveyard.

Granted, many of you readers–well, all of you if you weren’t a part of our childhood–will not understand the fourth rule.   That’s okay.  That’s why we have imaginations.  Some of us use it more than others, but it’s not something that can be borrowed.  If you don’t use your imagination you will most likely lose it. 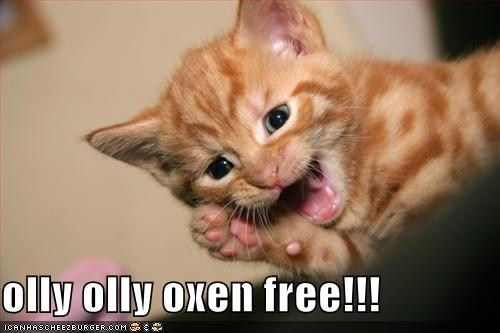 Really?  How could I not include that picture?

Run the bases was a game played in either my family’s front yard or our neighbor’s back yard:  these were the most open spaces, and the latter was more open than the former.  We weren’t allowed to hit the house with the rubber kickball-type ball, but we could peg each other, but not the face.  Back of the head was completely legitimate as well.

The same rules applied for Olly Olly, but the lamp post was the home base you would have to run for.  There was no point in traveling far to hide, since you had to make it back to that spot.  If we hit the pole hard enough, we could knock out the light for a temporary amount of time.

The point of Run the Bases was simple:  two bases, either (scratch that, my father never let us use trees, if we harmed them somehow we would get torn another… well, you get the idea)… Well, okay.  The two bases were usually frisbees or something of that nature.  Two people were it, and they tossed a ball back and forth to one another.  Within a handful of throws, the people on respective bases would have to attempt running safely to the other base.  If you stepped off the base, there was more leeway with throw count.

What were your favorite games that you played as kids?