My first road trip to the Adirondack Mountains in well over a year took place on the 19th.  It’s been a debate whether this was subconsciously purposeful, or if this was simply due to not having time or opportunity.  Denial was a factor, so it’s probably safe to say that the latter was simply believed for self reassurance.  I wasn’t busy.  There were a couple weddings to attend, a bachelor party, and a couple odds and ends–nothing that would stand in the way of my hiking or camping.

And that’s the tough part about relationships ending.  You share material things, which have to be divided.  You share memories, which cannot be divided or disintegrated.  You contemplate everything you didn’t like about her, what she did and how she made you feel (for better and worse).  You self-evaluate yourself (and that’s if you have a conscience, and this process had taken a personally unfathomable amount of time) and what you did, how you made her feel (for better and worse), and what you could have done differently.  When you’re with someone for two years give-or-take (we have to count the time pining after that someone, which is the time period and process of first glance through how the relationship was eventually engaged), you’re with someone who loves doing things, it’s going to be difficult enjoying such activities.  You’ll have to relive memories:  the good, the bad, and the downright ugly.  You’ll self-doubt your wanting/thinking about redoing these activities with another person.  If there was only a tally for the amount of times that this isn’t going to work or I cannot do this ran though my head, and that I agreed with myself.  If there was only a tally for the amount of times I’ve looked in the mirror after splashing water upon my face and spoke to my reflection–you’re fucked or you blew it or this will never be the same.

Instead of reliving memories with someone else, it’s best to grab the bull by the horns (cliché) and go solo.  The only one standing in your way is yourself.  And so, the day trip to Old Forge happened for many reasons:

Of course, I got up early and wanted to head up sooner than later; spending as much time as I can is essential.  It would be important to cram in as much as I could.  Of course, there were a couple errands to run, including picking up my sunglasses from my parents’ house (I have tendency to leave things there).  (This is where I would joke with my parents, telling them that if I didn’t leave anything then I wouldn’t be coming back.  My father would shake his head.  My mother would go full-blown Italian Mother Mode on me.)  Gas filled my tank at Sunoco (Hess, although less expensive, has pumps that do not agree with me), I purchased granola/nut bars that are now my favorite, and I almost got into an argument with the cashier at Topps for her persistence in asking me to sign up for a rewards card after telling her no, thank you three times over.

Of course, a mixed CD was made, because I am that predictable.  The CD, which is now owned by my parents, is filled with songs that are acoustic.  This was intended to be a double whammy:  songs that reminded me of the past couple years, new songs, camping-friendly songs, and songs that I could practice for karaoke.

Yes.  I did say karaoke.

Two groups of now intermingling friends would like me to do karaoke.  They know that agita sets in heavily at the thought or mention of that activity.  I’ll be willing to try it, and that may depend on the difference between two or three pints.  The songs I am opting to sing are two ends of the spectrum:  incoherent rock to hardcore/metal or sad bastard music.  The sad bastard isn’t a derogatory term, but these songs aren’t uppity for a karaoke night; they aren’t emo songs either.  For instance:  R.E.M.’s “Nightswimming,”  Damien Rice’s “Cannonball,”  Guster’s “Demons” or “Parachute” or “Either Way,”  and/or Pear Jam’s “Elderly Woman Behind the Counter in a Small Town.”  The latter was sung by Zach and I at a party my last semester of college; it was early in the night, and we harmonized well.

It’s to sing in the car on road trips.  It’s especially fun when you are riding alone.  You can be yourself.  You can yell, scream, growl lyrics without judgement.  You are yourself.  If moved by the lyrics, you can let that yielded emotion pour out of you however you choose.

My initial stop was Inlet.  Before the hike, I walked around and ventured into stores.  Importantly, breakfast/brunch was consumed at Tamarack Cafe.  You are what and how you eat, especially when you opt for the “Hungry Bear” menu item:  toast, eggs, home fries, and choice of meat (which was bacon in my case).  Tamarack makes a great cup of coffee as well.  The eatery has the best hot sauce as well:  Tamarack Sap.  Since it has been a family favorite, I stocked up on bottles for myself, my parents, and for Mike and Erin (two people I have yet to see since Thursday).  The hot sauce has a kick to it, but it is flavorful and not overwhelming.  You wouldn’t be ashamed to lick some stray drops off your fingers.  The bottle is simply this: 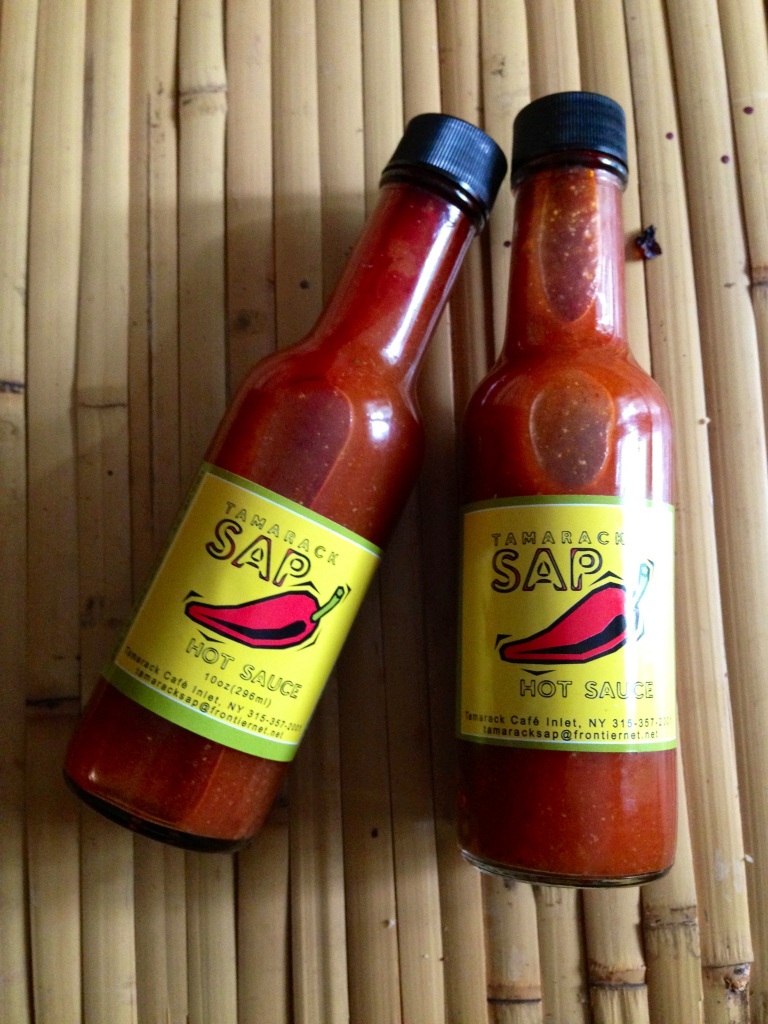 My next stop was Blue Mountain.  The original plan was to hike Rocky, Bear, and Bald; but the Adirondack area was warmer than I had hoped.  The first two share a parking area since the trails begin in the same area.  They are short, so it would be feasible to get them done.  However, I wanted to challenge myself.  Blue Mountain was my change of plans.  The distance threw me off, and I thought I had passed it at one point.  Instead of turing around, the consideration to drive to Lake Placid blossomed in my mind.  It would only be a two-hour addition.  As I drove around the bend and saw the Adirondack Museum, the proximity to the mountain was close and renegged on the Placid excursion. 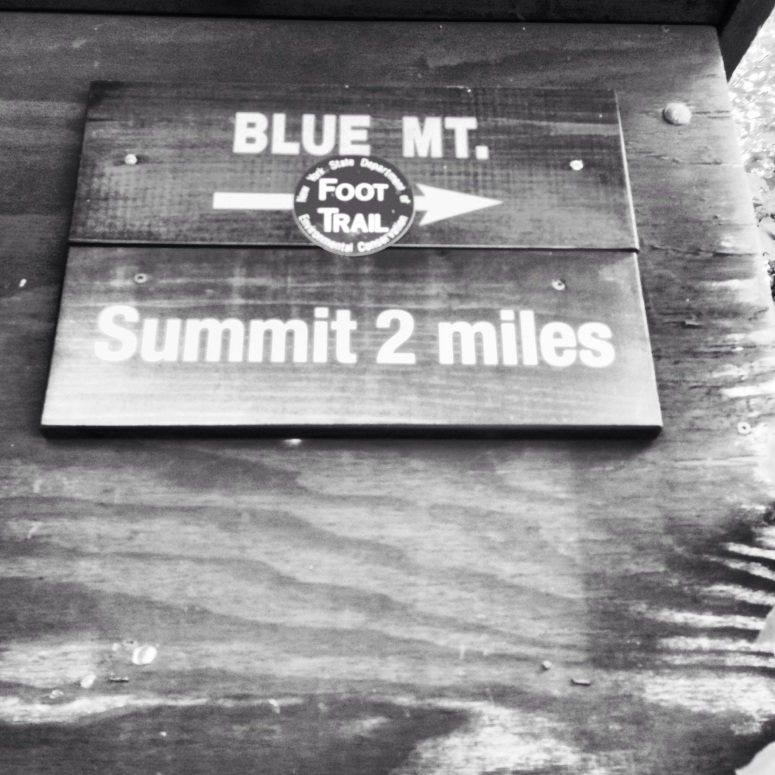 For two miles up to the summit, I:  walked, ran, ate a granola bar, talked to everyone passing by, drank two bottles of water, ran some more, caught my breath, lunged over rocks and obstacles, and I made it to the top where I drank a second bottle of water.  Sitting for a moment, catching my breath, I accepted the embraces of the breezes.  Straying off to the side, I found a place for myself to relax and meditate.; it was a brief moment, but meditation is meditation.  Climbing the rondaxe, I held onto the sides for dear life, anticipating for the damn thing to blow over.  It didn’t, my anxiety had been subdued, and I got some great shots. 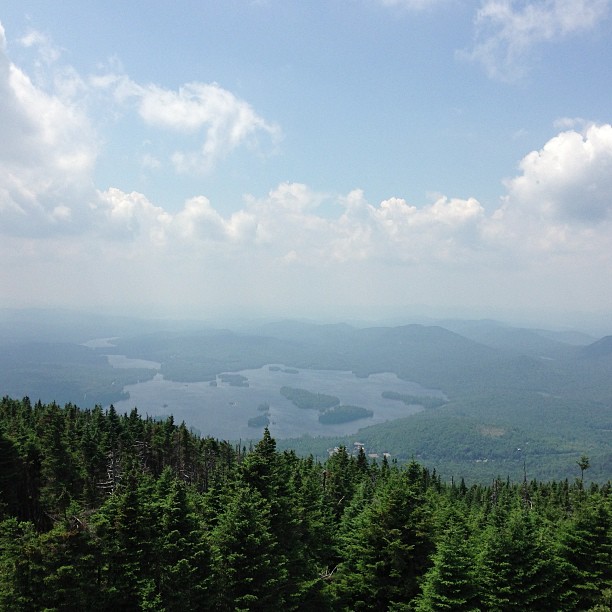 The hike down was filled with joy and disillusion from the heat.  Eveything was cartoonish around me, and it was almost as if I was Leo DiCaprio’s character from The Beach, generally speaking about the part where he imagined himself in the video game.  Three of the four bottles of water carried with me were consumed, and a quarter of the third was worn by my person.  Two more nut bars were consumed with obvious nom-nom-nom errupting by my person.  A rendition of “Zip-A-Dee-Doo-Dah” was whistled a bit as I stumbled over a rock and shocked my ankle.  However, I did discover the frog, which I named Waldo due to its credible camoflage.

The elevation of the Adirondack Mountains did not help ease the heat, unfortunately.  Luckily, no one was around to witness the wreck of a person that emerged from the woods, groaning.  I dragged my feet while exiting the trail; a couple sweat-and-water mixture droplets pattered upon the sign-in book while I checked out.  Remembering the fact of my forgetting socks dawned on me before I took my shoes off to switch to sandals; crossing my fingers, a wish floated from my mind to the sky, hoping my car wouldn’t stink up too quickly.

Perhaps I shouldn’t have ran.  However, there are no regrets:  it was a great workout.

I got home after debating against venturing further.  I shaved and showered before meeting my parents and my dad’s friends out at Tully’s for a buffalo chicken tender salad, which had a 15-minute lifespan.  If you have eaten at Tully’s, you know that the house salad with tenders is overly generous.  Having no other plans, I hung out with the four adults (by age default) the rest of the evening.  We tried to go out to Skaneateles in my mom’s Wrangler, top down, but the rain fell and wind picked up.  This was where my parents mentioned liking my sad bastard karaoke CD, which I brought with me.

With the rain falling, dampering our evening, my mother suggested that we play a game.  “Chris,” she asked, “how about we play that game you just got the other day?”

“Are you sure?  It’s not very politically correct.”

Well, due to my mother’s asking and insisting, we played Cards Against Humanity.  It got awkward.  For example?  This is one round where I had to choose the best fitting card: 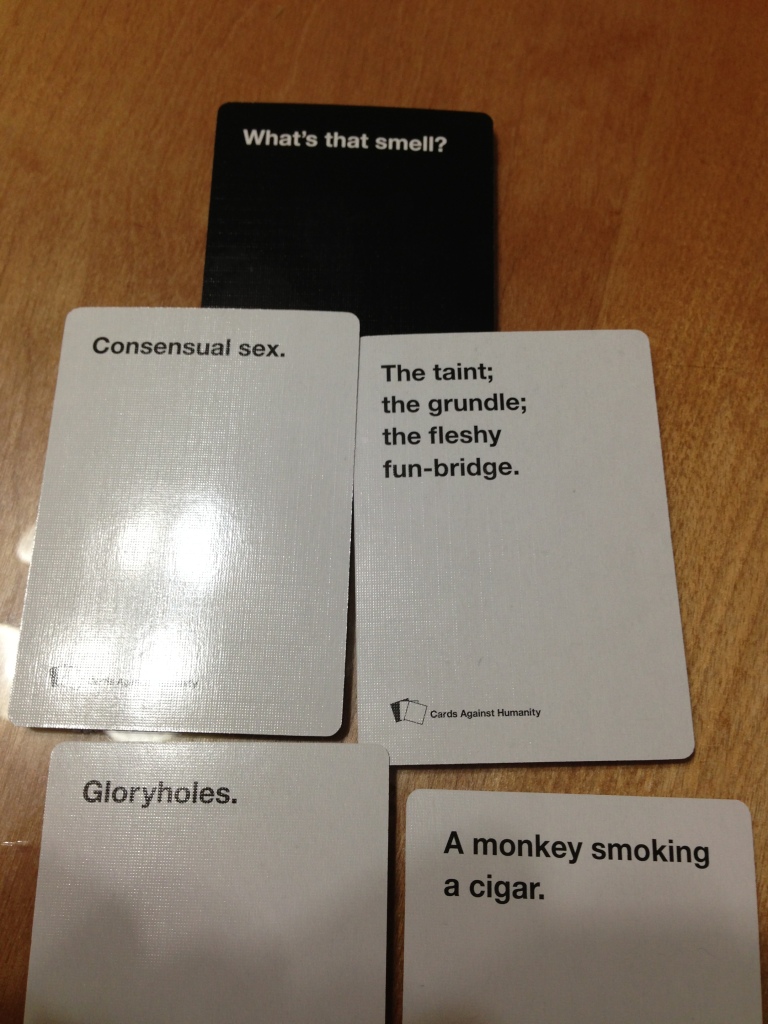 OK, I will stop there.  I simply replied front fart.

Let it be known:  my parents cannot wait to play the game again.

Other People’s Pets: Boog
There’s a science to it. | The MOST, Syracuse
Negatively cold temps. Positively warm hearts. | Osceola, NY
We both dislike the concept of Valentine’s Day but we love each other. Why have one day when we can have all the days? 📸: Holly Quinn Photography (@hollyquinnphotography )
Beauty surrounded by beauty. | Camden, NY
In the latest edition of CNY 55, my culinary cohort Alex and I took direct routes to the Scenic Root in Manlius. The darkened atmosphere is great for dining, but not for photos. However, the experience and food is applauded. I even enjoyed food I normally would pass in. Seen: Bourbon pork, goat cheese bruschetta, fried calamari, Utica greens, and the center cut filet.
Other People’s Pets: Larry
Fix your “e” — I’m judging you.
A gin drink with no name. Trust your local bartender. | The Fitz, Syracuse