Saying goodby to Syracuse for the day was easy.  I was anxious to get out and drive.  The music provided played off of old mixed CDs made in the later college years and a couple newer CDs.  Guilty pleasure enjoyment allowed me to keep the music playing, which proved that my taste has not changed much despite maturing.  The preferences have changed from then to now, but it’s comforting to kick back and listen to the emo punk and melodic post-hardcore bands that got me through college.  There is no desire to mention them, but–to give you all a basis for comparison–Good Charlotte was cranked at one point.

Since the family party did not start until 1:30 p.m., my departure time varied that morning from 7 to 7:30 to 8.  The trip takes four hours tops, and I didn’t want to get there too early; the key was to spend four hours at the party, an hour to relax for every hour on the road.  Usually when my parents cart us kids, we stay about two and a half hours, which doesn’t fly with me.  Around nine, I received a call from my mother as expected; it was the time she told me they would leave.  She asked me if I had left, and my reply was yes.  She muttered:  Oh, I figured.  This was where explaining my reason for leaving early came into play, via speaker, as I turned into our family’s usual Dunkin’ Donuts spot for coffee.  The Chenango Forks location was packed as usual.  The cars lining up for the drive-thru actually spilled out into the main road.

The goal was to quickly grab a coffee, black and only black, and not eat.  Breakfast would be eaten at the famous Roscoe Diner.  However, while pulling out of the parking lot, a second guessing moment came into play.  My mother suggested I pick up my cousins Candace and Rebecca, who live in Middletown (Orange County).  I thought that was a brilliant idea, but my breakfast time would be compromised.  Thinking quickly, I remembered that there were two more granola/nut bars from my hiking excursion two days ago.  Jackpot!  The bars did not hold me over as hoped, but at least they were something rather than nothing.  A call was made, and they were going to drive with me.  Their parents would be at the party, so it was comforting to know the sisters had a ride in case I would leave early.

Their father came home from mass, and he was surprised to see me solo.  My uncle, who is a phenomenal cook (this actually runs in this side of the family), asked me if I wanted to try his seafood bouillabaisse.  When it comes to food, I definitely will try it.  It was delicious.  There was so much flavor and an elegant spicy kick to the stew, which wouldn’t be overwhelming to those who do not enjoy overly spicy dishes.  The stew consumed was full of seafood and veggies; it was moderately hearty, which meant anyone could have a second bowl.  I didn’t want to over-indulge, but what I devoured kept me in suspense for what could have been my eating more.  He shared stories of his attending the Montreal Jazz Festival, and his favorite acts were She & Him and Belle and Sebastian.

Candace and I headed out for a relaxing ride into New Jersey.  We enjoyed the randomness of a newer CD that I had put together.

Despite my paternal side relatives being scattered across the country, mostly in the northeast and southeast,  there was a fair showing.  Of my father’s siblings, four of the eight showed.  My parents, unfortunately, did not.  Like a good mama’s boy, I called my mom to let her know my arrival was a success.  Their friends had not left at that time, so my parents would not make it.  It was strange to be duped by your parents, especially when they call to make the note that they had figured out my leaving.  I was thinking they swung by my apartment to pick me up and found my car not there.  So, after telling my relatives that my parents were an hour behind me, it was my embarrassing duty to let them know that they were going to be no-shows.  Finding about my brother’s day-o-sickness, I let the relatives know that I was the Malone representative. 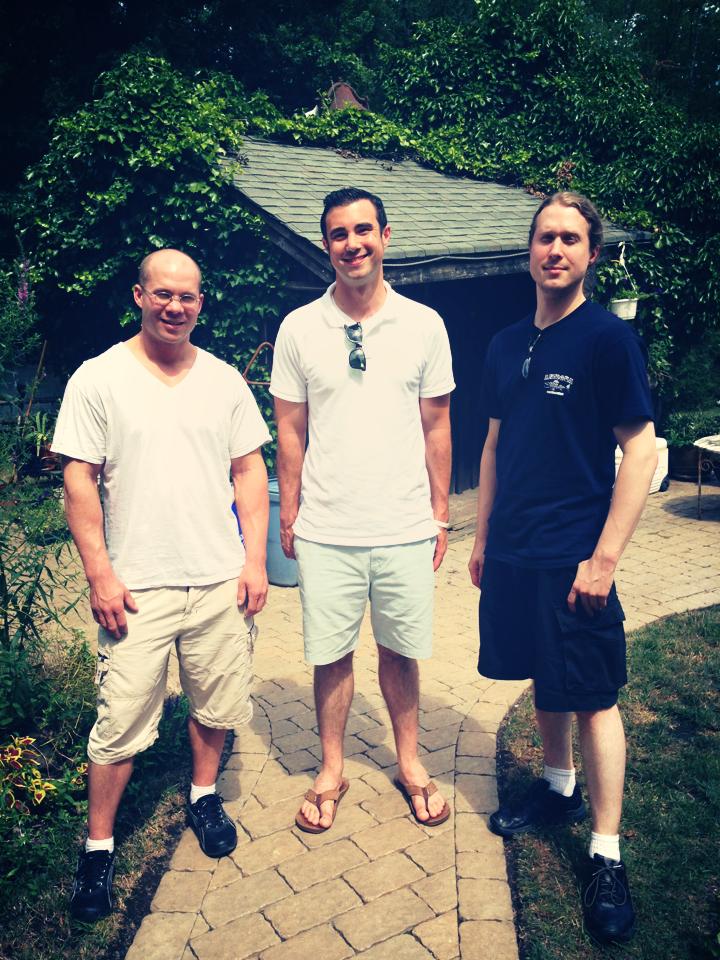 {Both of these pictures were provided by my cousin, below, and these three are siblings.  They’re Connecticutians, and we don’t see each other often, but that needs to change.  The picture below was supposed to be a redo, but it turned more candid.  Please notice my being caught in the laugh-to-smile transition, which makes me appear as if I have something sour in my mouth and/or trying to hold in a fart.  Plus, it looks like I am gripping the fence tightly.  After speculation, I look like a Malone in the bottom picture.} 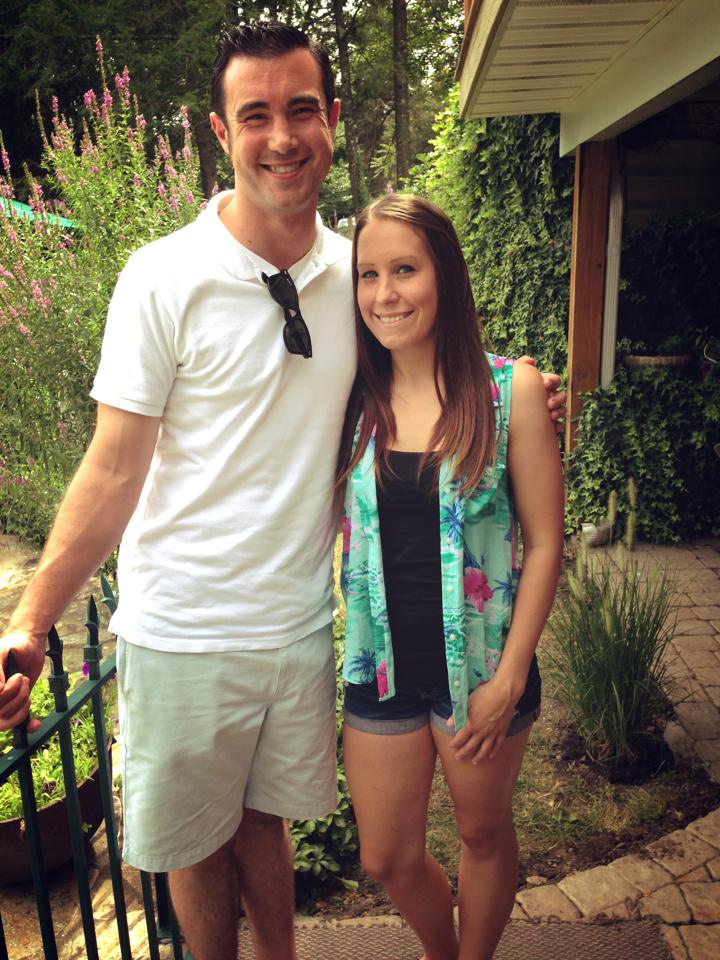 There is a uniqueness to my family, my father’s side since we are on the topic.  There are eight siblings.  There are 13 of us grandchildren.  We vary in age from 40’s to single digits.  We all have distinctive personalities and characteristics, and even some siblings–myself and my brother included–don’t look exactly like siblings.  It’s a great quality to have such a variety of personality in our family.  It makes writing about them that much easier.

I would never subject my family to blatant writing to pick them apart.  I would/will (yes, not making promises) joke, but the situations would be objective and relatable.  It has been suggested to me in a jokingly serious fashion that I should write about our family some day.

For instance, one of my cousins is a senior and high school, and he is a nationally recognized wrestler.  How can I rag on that?  He’s looking at a variety of school, and Central New York has a contender among his choices.

Due to distance, it is difficult for some to travel up; however, you will be hearing about my visit to New Orleans this late August and early September.  It may take a few days to write a few entries.

So, I left the party around five that late afternoon, and this was after cake and coffee (I LOVE their strong coffee down there) were consumed.  I did stop at the famous Roscoe Diner for coffee.  There was a debate to eat at The Spot Diner in Binghamton, but my ambition to get home kept me driving.  The hour-long drive to Syracuse asked to be completed.  It was exhausting, ply my car felt that the amount of miles put on her was nearing exhaustion.  Being practically to Syracuse, it was simply worth sticking with that last sprint up I-81 and not stopping.  It was getting dark, so driving further into darkening skies was almost not worth the fuss.  Driving past my apartment, I headed to my parents where I talked about the day while consuming a brownie ala mode (cookies-n-cream).  The traffic lights seemed so much brighter than usual that evening as my car turned off Exit 17 to Salina Street.

Night driving, after three hours of dimming daylight driving (seven hours to count the whole day), is odd.  You’re body and mind are drained.  It was similar to coming down Blue Mountain without physically sweating, and there were no flies swarming around your person.  That was an annoying aspect.  Upon my attempt to swat at one, I hit my sunglasses off my face; the Ray Ban eye protectors encountered some scuff and bruises as it fell upon the rocks.  The sunglasses were nestled in their specified car compartment.

There isn’t a cruise control option in my car, so music choice is important.  The type of music determines your speed.  Listening to The Beta Band was a perfect choice.  I have 29 songs within the band’s catalog, which helped guide me back to Syracuse.  It was a meditative state, listening to the smooth and groove that is their music.  My eyelids drooped, but they did not come close to completely shutting.  I swam in the mellow of “Wonderful.”  My mind amused “Simple Boy,” “Smiling,” and “Broke.”  The track that stuck with me:  “Inner Meet Me.”  Other great songs along for the ride:  “Dr. Baker,” “Dry the Rain,”  “Easy,” “Dragon,” “Monolith,” “Al Sharp,” “The Cow’s Wrong,” and “Troubles.”

It drifted through my head as I consciously felt my eyes roll back into my head before the onset of sleep.