My guitar was sitting without strings.  The strings–at one pont–were still on the guitar, but they drooped with the ends resting upon the ground.  One of the strings broke at one point, so I stopped playing.  The damn pegs were difficult to pull out, and the tool to remove such nuisances was (and still is) missing.  So, huffing and puffing, thinking where the damned thing could be was how minutes burned by underutilized.  For weeks, the guitar simply sat there.  It’s was the easiest approach, because a knife was just not cutting it.

So, a fork was used.

There is nothing like a new set of guitar strings.  The notes are so crisp.  One chord can be so inspiring.  However, this guitar hasn’t been played much in the last few years; the strings were strummed more in the latter year, more than the previous two years combined.  Practicing meant time to myself, but that meant time lost/implied ignoring another person.  It was complained about my not playing songs too often; practicing does not mean teaching oneself to just play songs.  The guitar, its strings, the frets–everything is intricate.

Instead of standard tuning, it’s now tuned down a step.

The lower tones are easier to sing over, but that’s if and when there is an attempt to do so–alone.  The notes have a new confidence about them.  The chords are dressed up sexier.  Some may say the music sounds more solemn or darker, and that’s opinion-based.  To the guitar player, who may not be used to tuning that low (like myself, but I will tune down a half-step once in a great while), it may be intimidating.  It won’t sound right.  Even after applying the capo to fit a song, which would normally be played in standard, its placement is on the eighth fret instead of the sixth, the song does have a different timbre.

Drop C is a bit intimidating, I must say.

The last time either of my guitars were D-tuned (yes, a pun) was probably freshman year of college (2001-2002).   I probably would ask Bill, “Do you like how chunky that sounds?”  He’d just laugh and shake his head.  There is pride behind saying that I got him into heavier songs, but not have him be religious about the genre.  Nu Metal was still a craze back in those days.

Yet, our song (yes, Bill and I) was Save the Day’s “At Your Funeral” despite musical differences.  We enjoyed the same music for the most part.  We were both tall and lanky (and still are), education majors, enjoyed soccer/futbol, and we loved the same movies.   We had to differ somewhere.

When I saw him pull in with his family, I knew it was him.  Upon realizing this, I pointed out to my parents:  “That’s him.”  My mom said I was foolish to assume such things.  I exasperated an, Oh, mother, don’t be so ridiculous.  My father:  Tut! Tut! Now, family.  If the boy thinketh, my dear, he shall thinketh.  We were in an Old English phase at that time.  As it turned out, I was correct; I threw it in their faces with a boisterous BOO-YAH!, waving my hands in gangsta fashion.

Anyways…  Where was I?

So, during the emo craze, when emo was actually emo and not wannabe goth as it is today (it’s half assing it), it was cool to drop your guitar down a half-step (yes, half assing it as well).  You were post-hardcore if you went Drop-C#, and stressed your melodic clean-toned playing skills.  Most people would play solo, and they would give themselves a stage name which would sound like an actual band.  When spectators showed and saw that you were just one person, they would get all sentimental about your artistry.

Dashboard Confessional:  Chris Carrabba is damn near 40, and he is still singing about his failed high school relationships.

Yes, I am aware of my borderline assholeness.  It’s part jealousy (yeah, not-so-much), and let’s face it folks:  I listened to this music much of the time.

Okay.  It’s obvious that I can’t focus while writing what I originally intended.

In short:  Golly, I am sure happy I changed the strings on my guitar!  Aw, shucks!

And now: I present that picture, which was mentioned in a few blog posts ago, of the studying Brian and I (with the accidental orange hair). I am not sure which post it was, because the time to look is minimal; I still have a few things to pack for this weekend. However, it this was taken in the days of jamming and rocking out to the improvised “Death Polka.” 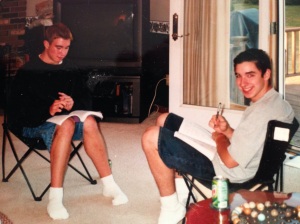