The ride back on the N felt habitual.  There was no thought as to the location of my destination; it was known, my steps were already calculated.  The sun was preparing to turn in; it’s August in New York, and the slightest changes are already noticeable.  As I am typing these words down–this will be my first round before saving the drafts over and over–it’s 8:32 PM on Sunday, August 11, in Syracuse and there is disregard for my wanting to log in an odd time (this even number somehow suffices).  I’m sitting on my parent’s veranda, typing away on my laptop while in the rocking chair, and Lou is cuddled up on the chair across from me.  The sky is is darkening.  The blue of the impending night sky is my favorite shade; a pink trail drapes over the horizon, a candle fading down a long hallway.

It was still light out in Astoria.  I came home to John relaxing on the couch, watching television, playing catch up with seasons of How I Met Your Mother.  It’s not ironic, but it’s iconic:  his watching this television show.  My friend, Paul, and I joke around often due to our liking of the show.  It takes place in New York, essentially, and McClaren’s would be the essential hang out for any close group of friends.  Before it closed, we–those of us in Syracuse–had Clark’s Ale House.  Religiously, Paul and Chris and I would go to Clark’s on Saturdays for a post-work beer and the pub’s famous roast beef sandwich.  The place had 22 taps, and 1 sandwich, as the line went.  We got to know the staff and became familiar with the regulars.  It is surely missed.  Other museum staffers came along as well, and we cannot leave them out.  However, us three men used this time to efficiently bond and banter.  As we buddies drank our beer and ate our beef, we bantered about broads and bullshit.

Recently, Paul and I are still trying to locate our McLaren’s; he lives in Hanover Square and above Bull and Bear Pub, but we mostly flock to other venues.  No offence, Bull and Bear, but your atmosphere doesn’t seem to add up to a McLaren’s feel, or however that feels.  It just simply does not feel right, okay?

But life in the big city.  That’s probably the feel that we are missing.  I’ve lived in Syracuse all of my life.  I’ve lived in parts of the city, but always spent time with my family (especially) during the holidays.  I’ve never shared a camaraderie with others, people who also lived away from their families.  If/When I move away, I will probably come back home, but there will be those times when I’ll just want to stay and have a holiday feast with friends.  My brother and his girlfriend throw a Friendsgiving every year before or after Thanksgiving.  It is an amazing time; we bring something to pass, but we simply hang out in the comfort of a home and delight in being surrounded by friends.  I was essentially adopted into their crew, which is mostly consistent with the 1985-86 years of births.

I’m 30 now, and the pressure is on to begin something:  a relationship to marriage and eventually children.  Today, my mother was laying the not-so-subtle clues that she wants me to stay in Syracuse and she mentioned a couple prospects to consider.  She immediately stated, I’m not saying you should date her, but we know that she truly means that I should consider.  I know where my head is at–confused mostly–and there is a lot on my plate.  Should I go for the one-bedroom or should I move back in with my parents temporarily so I can save up before shipping out.  Should I start some relationship now and try the long distance (run around), or should I not give a shit.

It’s 9:08 PM (yes, another even number), and it’s a dark out.  I’m still typing away.  I’m drinking tea, and eating a delicious cream puff from Picasso’s Pastries, which is located on Westcott Street in Syracuse.

John and I headed to the Astoria Brewhouse, which was a great treat for dinner.  We kicked back, and we caught up some more.  We spoke about his trips to New Orleans and Portland as I anticipated my trip to New Orleans in a couple weeks.  My dinner option was the steak sandwich featured here: 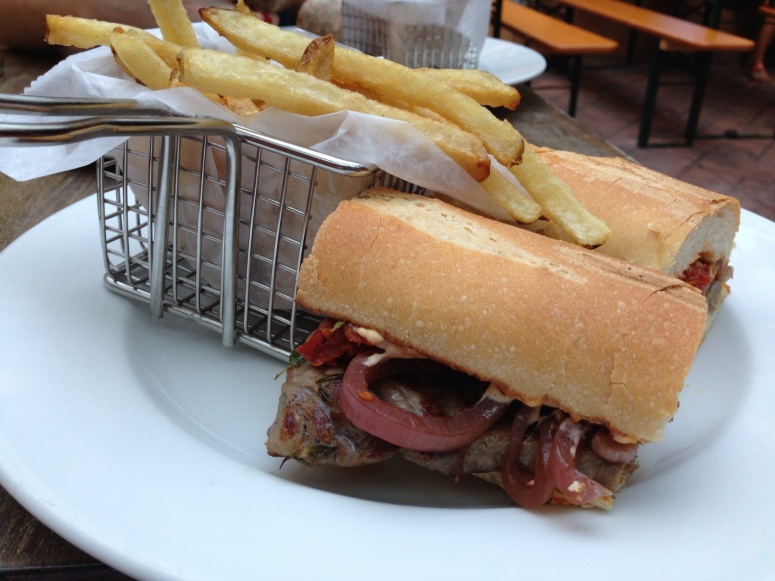 The sirloin sandwich was grilled perfectly, and it was topped with caramelized onions, sun-dried tomatoes, and chipotle mayo.  The size of the sandwich and basket of fries is perfectly sized.  The chipotle mayo was amazing.  It was flavorful and presented a powerful kick.  As you consumed the dinner, the spice gradually increased to a spicy masterpiece.  At one point, I looked over at John and said that my palate was celebrating.  The chipotle kick snuck in and made itself present.  For my side:  Dogfish Head 90 Minute.

We got back to John’s place, enjoyed a beer, and watched four episodes of How I Met Your Mother.  Unfortunately, we ended the sitting with “Bad News,”  the episode where Marshall’s father passes away.  Despite my knowing this was going to happen, the episode ended and John said, “Want to get going?”  It was awkward because we were both used to his suggesting to watch another one.  Now, since we had to get going, we were a bit unnerved.  It wasn’t the best episode to end with before going out.  I didn’t know about John, but I was still exhausted from the night before.

We went to an Irish pub, which is called The Irish Rover.  On the railings and the door, as well as a few other sections of the outdoor facade, paper with the words WET PAINT were taped.  As if we were crossing a canyon on just nailed-together 2×4’s, we entered the Rover as carefully as we could.  The hospitality rang with a guarantee:  third pint is free.  Not a bad deal, especially if you are drinking Guinness all night.  FACT:  Guinness has a very low amount of alcohol and the least amount of calories.  Plus, this helped considering my having to drive back to Syracuse the next day.

Justin was meeting us out again, and Erin and Jen were already waiting for us.  Two others, whose names I sadly cannot remember at this moment, were scheduled to come as well.  Jen greeted us with a smile, which never seemed to leave her face the entire weekend; it’s good to surround yourself with cheery and friendly people.  Erin, to prove her consistency, donned another retro look and wore brilliant red lipstick.  They stayed for a little bit, but ducked out early; ramifications from the previous night.  Justin discussed his desire to travel and asked me about my experiences abroad.  I told him to not hesitate; he’d love it, and I have to encourage others to travel when they have the chance.  He has a friendly demeanor, and he would do fine even travelling by himself.  Taking the tour was absolutely convenient, and I didn’t have to drive around.

I was hoping Erin would have stayed.  She was very easy to talk to, and we seemed to get along just fine.  It just wasn’t in the cards.  I honestly was not going to appease the Astoria demi gods and goddesses by making out with her.  It was conversing, having that kind of connection in the big city.  It was assuring to talk to confidence with confidence.  This notion helps verify the obvious going through my head at the moment.

A bachelorette party stayed the majority of the night at The Irish Rover.  I am sure there were so many other places these women could have went, but they chose the pub.  All of the women became progressively unappealing, and after they became so hideously grotesque it was aparent that the cream of the crop were married.  That would make things simple–the taken would be weeded out so easily.  The 80’s tunes they requested on the Touch Tunes actually went over well; my setting up Bloc Party and Everytime I Die did break up the songs, but for the worse.  “Purple Rain,” despite it being a good song, actually had a weird feel to it; it didn’t seem to fit in.  Then again, it was obvious who put it on, and it wasn’t a member of the party–it was the girl using her fist as a microphone.

The blaring of the comical car horn woke me up to a sunnier morning in Queens.  I showered, and headed out.  I was supposed to get brunch with John and the roommates, but I opted out.  It was a long weekend, and my body felt drained.  A lot went on. My thoughts raced.  My spirit was elated from having such another wonderful experience.  Aside my last time in the city, it was for a bachelor party, was a bit rough when it shouldn’t have been.  Like it was stated, everyone goes through bad moments in their life; this moment just seemed to extend a bit.  Bad things come in threes… or plethoras:  my camera was lost, I announced that I disapproved my belief in the sanctity of marriage (save my state of inebriation and that my own relationship at the time was a bit clouded [again] at that time), relationships were tarnished, my refusal to go into a strip club, I smoked two cigarettes, had a heart-to-heart with a stranger, and left a mess next to a planter of flowers and a newspaper dispenser.

Sometimes you have to leave on a low note.

However, I did not.  This trip went well, and there were no issues.  En route to Syracuse, I swung by and saw some relatives in Orange County.  Despite the break in my trip being early, leaving three hours to drive left, it was worth it.  It seemed to be justified that I shoot my cousin a text, asking her what she was up to.

And, hey, she had made a peanut butter and strawberry preserve dessert.  You know my adoration for jelly-types.  However, I did eat it, and every bite was savored.