It’s been fun stressing the importance of local business and agriculture, because it’s important to support and excite the local economy.  We live where we live, and it’s great to keep the support and money circulating to stimulate our local region(s) and state for that matter.  Syracuse First is bringing back the Buy Local Bash, which will take place Monday, November 25th from 6 PM to 9 PM at the MOST, the Museum of Science and Technology.  Get your tickets, and attend this incredible event.

Yesterday, I attended Farm Aid 2013 at Saratoga Performing Arts Center, and it is the first time New York has hosted the festival.  I don’t think I really need to go into too much detail about why this takes place.  Agriculture is such an important aspect to not just New York or the United States, but the rest of the world.  Big business is taking over, and it is crippling smaller farms.  It’s important to attend farmers markets for your locally and nationally grown produce and goods.  Even when you go into Wegmans or other grocery stores, it’s important to pay attention to labels, reading where this product is coming from.  I know for a fact that Wegmans, there are many of you Wegmans shoppers reading this, labels their produce especially; I have seen plenty of goods from local Central New York farms.  The produce is also labels as products of the United States or elsewhere.  Be sure to pick those goods up.  If you are confused and want more information, simply ask; the workers are more than willing to answer your questions about where your food comes from.

When you pick up your dairy, specifically milk, look at the number below the Sell By Date.  If the number begins with 36, this milk comes from a New York State farm.

It was great to be with friends and family for the concert.  I ran into college friends, who I haven’t seen in a very long time (we did a double-take and all). My parents have become more aware, and they do flock to buy more New York and United States produce.  They have been avid Syracuse Farmers Market goers, so they don’t need encouragement.  My father brags before we eat–“This is local,” he says often and with a smile, and it’s almost an in-your-face smirk that accompanies it.

This morning we, my parents and I, went to the South 30 Diner in Amsterdam.  Instead of going by the Dunkin Donuts by the dreary Super 8 we stayed at (according to them this was “highly rated” when compared to the rest), I convinced the driver, dad, to go see what this place was all about.  Taking a wrong turn, we drove by an Emmy Lou’s, but–despite some convincing–I told the parents to opt for the South 30, and that they should trust Siri.  “But there seems to  be people here,” my father said as we turned around in Emmy’s parking lot.  “Um, no,” I replied, “Turn around and let’s go to the other place.”

The South 30 Diner is this quaint country kitchen, and you step into a house.  It’s similar to Syracuse’s Mother’s Cupboard (as seen on TV) or Rustin’s Diner.  The three women working were busting themselves, running every which way to keep the moving crowd satisfied.  My father opted for the breakfast sandwich, and my mom and I opted for the specials:  she got the berry pancakes, and I opted for the fall omelette, which contained fried green tomatoes and squash.  Absolutely delicious!  The South 30 Diner defines a locally-based restaurant.  The eggs, my father pointed out, tasted so fresh; and he was/is right.  The squash and tomatoes in my omelette were delicious (you know what homegrown produce tastes like).  My mother’s pancakes:  the blueberries and strawberries stood out so well with the light batter of the breakfast staple.

It hit the spot and we rang the bell on the way out for their service and keeping it local.  Here are some pictures of the South 30 Diner, and the food that we ate: 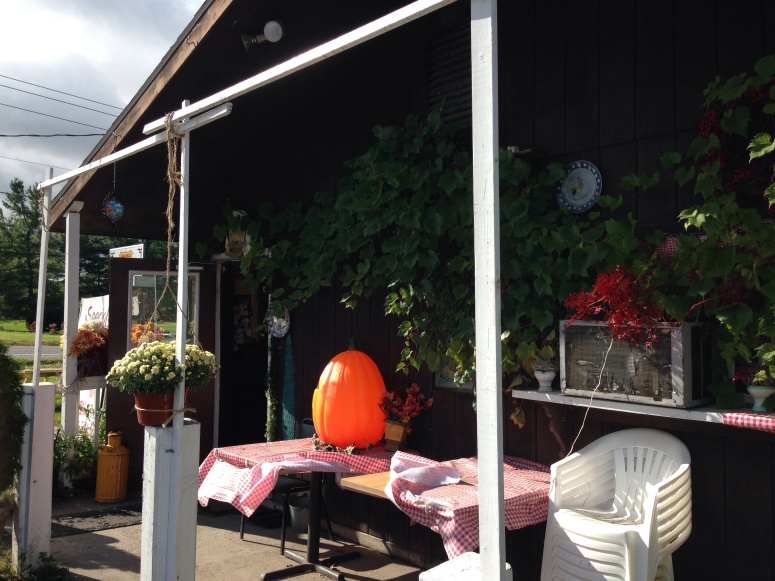 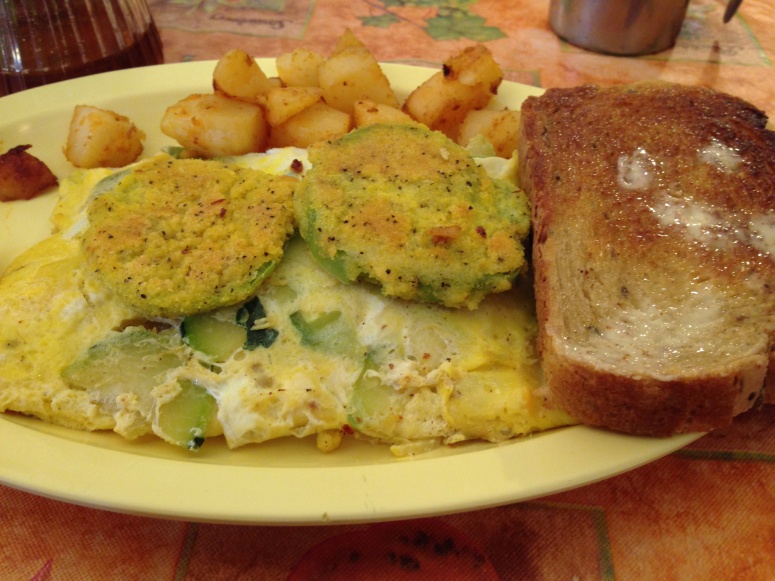 One thought on “Local, Nationally”