This was snagged from a blog a follow, Reluctant Writer Girl: 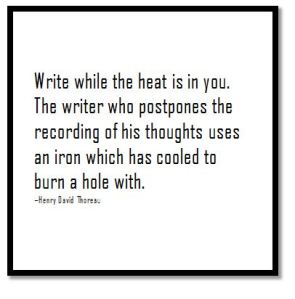 With the brief mention of Henry David Thoreau in yesterday’s post, the notion prompted me to continue with him.  It would be idealistic if these posts that I write could segue from one day to the next, like the songs on an album which blend into one another–no, I do not know the technical term for this–but for each song on the album instead of a couple tracks.

Yes, it can be considered nerdy of my carrying a pad and pen with me.  Despite the reliability of my phone (Convenience!!!), which perfectly takes notes for me when I speak into it–giddy smile and cunning shiver–the old school method works well for me.  It can be appreciated.  The frustration that has been felt when returning to an idea after a while is not something that is fine with me.  If there is an idea, it’s best to get it down even if the idea(s) is/are not cohesive or fluent.  The idea could be quick statement bursts and/or could be several words strung together incoherently.  The fervor is there, and you’ll be able to easily recall what you wanted to say upon returning to your notes.  If you wait, however, your ideas may not come out as you originally had thought, or you’ll lose what you wanted to say altogether.

The difference is amazing, writing to write in comparison to writing when you have ideas brewing.

It takes two seconds to jot down those ideas as well, and you don’t have to keep an entire notebook in your pocket.  For a guy, it makes our butt look weird if we have a wallet in one pocket and a notebook in the other.  I’m not self conscious about it, otherwise I wouldn’t do it as often as I do.  To keep a notebook in your front pocket is simply uncomfortable.  That’s why I find napkins; the downside to this is developing a hoarding habit.  Don’t worry, because I always recycle them.

That would be funny, waking up to have your entire bedroom (or house) covered with a blanket of napkins.

The idea writing goes along with everything.  That quote above can be applied for any person and any position.  If you have an idea for advertising, for marketing, communication, public relations, management, sketch writing, etc., it is important to get that idea down and mapped out for future reference.  The future reference should be in the close future as in later that day or the next day at the latest.  Don’t put off your brainstorming for too long.

If you’re hanging out with family and/or friends, the work can wait; where it is important to succeed, it’s also important to maintain your relationships.

Yeah, you get it.