Perhaps all of This is wrong.  I’m doing This all wrong, and by pressuring myself to fulfill the desire for the bigger and better novel and blowing the undermining out of proportion with my desire for detail to drive a short story—no matter how short or long the story may be—which, when it comes down to it, stifles the get-to-the-grind attitude that it takes one to actually sit down and write.  The current short stories that have been on the docket have been collecting more dust than the novels; the coats or layers are too difficult to determine at this point—the dust layer is all about quality and not quantity, but quantity does determine quality since more dust—

You got it.  We’ll get back to this in a moment.

A jackpot, in my opinion, was hit when walking into Unnameable Books, which is located on Vanderbilt in Brooklyn.

The used bookstore is always hit up when traveling to the borough.  This followed Becky and my trip into Barnes and Noble to find gifts, and an opportunity was taken to look for me.  No one in my family reads much, and the exception goes to my father.  Thinking a B&N would be more enriched in Brooklyn, the theater/play section was B-lined for, because I was looking for books on improve and Martin McDonagh plays.  There are posts with my mentioning my adoration for the Leenane Trilogy; however, to my dismay, McDonagh’s The Pillowman was the only available play (just as the Syracuse stores); that’s corporation for you.  In recent years, McDonagh is famous for his films In Bruges and Seven Psychopaths.

The art of a used book store is to go in there with an open mind.  It’s important to have a—cough-dozen-or-so-cough—few books in mind, but you don’t want to leave disappointed.  Used book stores may have just as large of a selection as a corporate store, but there will be more varieties and less specificity in a smaller space;  hence the crammed shelves and the haphazard displacement of books, which are stacked horizontally upon the books already on the shelves or stacked in piles upon the floor.  (I’m saying this because there are people who’ve never been in a used book store let alone an actual store. Everyone should take time to read.  Sure that is my opinion, but that’s how it goes.)

As usual, I stepped immediately at the K section, because of Kerouac.  Wait, that’s a lie.  The first section I came to was a wall of books with the F section, which is where I found The Crack-Up by F. Scott Fitzgerald.  This was never seen before, so my right hand grabbed it I followed up with going to the K section, because I’m always curious what Kerouac books are available.  Big Sur is on my list, but a copy was not available.

What was come across was Orpheus Emerged, which was given to me by Molly, who is mentioned in the first post of this Brooklyn series.  Molly and I got each other for a Secret Santa in our Young Adult Literature education class with the notorious Stearns leading the class.  This was the same class where I first learned about Susan Fisher Staples, M.T. Anderson, and Donna Freitas (all of whom I met at The Gathering literature conference attended two summers ago.  But Molly and I cheated and confessed to each other while she was working at the Old Spanish Tavern one night.

How the hell do I remember that?  I just simply do.

I ended up getting her a stuffed bear, a shot glass, and cold/cough remedies because she was sick.

How the hell do I remember that?  I just simply do.

It was kind of funny that things turn out that way.  Good people, good times yield great memories.

After my disappointing K search, my eyes followed the shelves over-and-down and up-and-over to repeat.  Steve Martin’s Shopgirl grabbed my attention, and my response was grabbing it back.  The second book was in my arms.

Now, if you’ve ever been shopping with me, you’ll know my tendencies to pick up several objects—whether they be clothes, CDs, movies, books, and/or anything else—and mull over buying them while walking through the store, and my putting the objects back, and picking up something completely different to buy or leaving with nothing at all.  It’s how I roll, and it annoys me; yes, I annoy myself.

Shopgirl was not going to leave my hands, however.

To the theater section for improv books and plays!  No improv books.  But plays?  The Pillowman and The Leenane Trilogy were cozy and adjacent.  The latter was spooning the former.  Done and done.

Cha-ching went the register, and the bag in my possession was filled with mind candy. 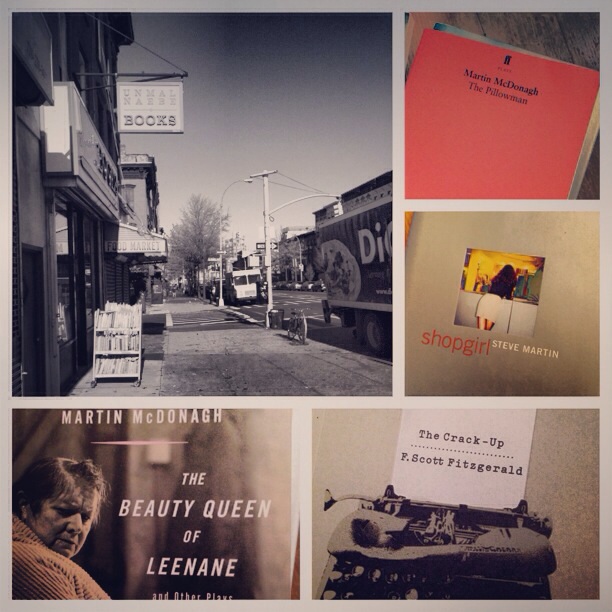 Steve Martin—in my opinion—is a talented actor, comedian, writer, and musician.  His pieces of literature are on the short side—novellas.  Shopgirl is a novella; I’ve never seen the movie, however.  It’s was easy to fall in love with the novella despite reading only couple pages.  He has a great voice, Martin, and the characterization has kicked off to a pivotal start.  Being on a train and not wanting to get emotional over literature—not bawl-eyes-out emotional, but there has been habits of my getting choked up—the hardcover was placed back into my bag.  The prose just flowed, and my getting distracted easily by the cackling couple in front of me would eventually become an issue.

They’re watching some movie with Tim Meadows, the only actor I saw while peering over the seat to see what was going on, which probably isn’t that funny.  SNL cast members, in my opinion, have more flops than not when hitting the big screen.  There are many exceptions, but there are more flops than not, especially in more recent years.  Sure, this is snobbish to say.  The laughing seemed a bit unnecessary.

Anyway, since the topic is being drifted away from:  novellas are supposed to be talked about here.  Why the hell don’t I take a shot at those?  The non-horror novel has a nice beefy start to it.  Part of the reason why the product isn’t close to being finished is because of my anticipating the length of the book.  I’m freaking myself out for no reason, and it’s because of the lack of strategy.  It happens, but there will be a lot of work no matter the direction taken.