It’s the holiday season, and you’re looking for a gift to give your family, friends, special someone, and you (of course–why the hell would you leave yourself out?).

We all know that sometimes there is a struggle when it comes to gift giving for some people.  You try to think out of the box, and sometimes you fall back on gift cards.  Sure, those pieces of plastic are handy for individuals to pick out things that they want, but the underlying meaning of the gift card is the giver’s lack of trying or giving up easily.  Where is the creativity behind a gift card if the receiver doesn’t ask for it?

Well, unless you Bedazzle the card.

Resolutions are made at the beginning of the year to try something new.  You want to spend more time with your family and friends.  You want to grow as a person in some way or another.  An option would be to try something new?  When you see that cooking, dancing, skiing, skating, or other recreational classes are offered, the consideration dwells in your mind.  You’re interested, but you may not want to do this alone.  Your sibling, significant other, or friend want to try one of these out, but you’re reluctant and anxious.  Looking bad or failing can be intimidating, but it shouldn’t slow you down; others are trying this new thing just as you are, and it’s most likely they won’t get everything on the first try.

You may say that you’re not funny, that you couldn’t do it, and the possibility to get up on stage is overly intimidating.

Remember those times when you thought you acted foolish?  You erred?  The end result, after the regret, was you laughing at yourself.  Remember that pun or joke you made up on the spot?  People laughed, and it stuck with you to reflect on.

We are human.  Not only are we all far from being perfect, we’re all living life and learning.  When we are living, we have our funny moments.

We are all naturally funny.

Improv requires what is exactly listed above.  Patience is also important.  There is no need for props–you will be pulling props out of thin air–but you will have a flat surface to play on (a stage), lights, and up to four chairs.  There will be others there, and you’ll make friends.  You’ll establish fictitious relationships while your real-life relationships are being developed and strengthened.

Communication is a general term, it’s broad, and it’s probably one of the most important things in life.  Without some form of communication, clear communication, nothing can get established.  Nothing is developed.  Nothing is successful.  Everyone struggles with communication in some way or another.  Improv allows you to practice and get better at it.  Your friends, family, coworkers (and clients!) and significant others will see that change if it is needed.  Your fellow improvisers, seasoned and beginning performers, will see the difference.

Improv helps relationships with getting you to communicate better.  This will benefit your work ethic. You will listen more.  You’ll elaborate.  You will learn to speak in a clear and objective manner.  You will give, and you will take.  You’re creating something from nothing:  a play with recurring themes and motifs, a play with a few scenes and intermingling characters, and these will be plays where you’ll visit those scenes a couple times before tying everything and everyone in together in the final minutes.

Most importantly:  you will be yourself.

Come January, it will be one year that I’ve been performing improv.  I’ve taken five classes.  I’ve performed every month, at every Bank Show and Non SICuitur Thursday (our open mic night); these performances have been by choice.  I jumped on stage and jammed at Rochester’s Fall Back Festival.

The mantras that we newbies have had:

There have been so many times that I’ve said something, denied somebody, and screwed up in general.  Like everyone else, I am my worst critic and thoughts of woulda/coulda/shoulda come into my head after every performance.  It’s natural. 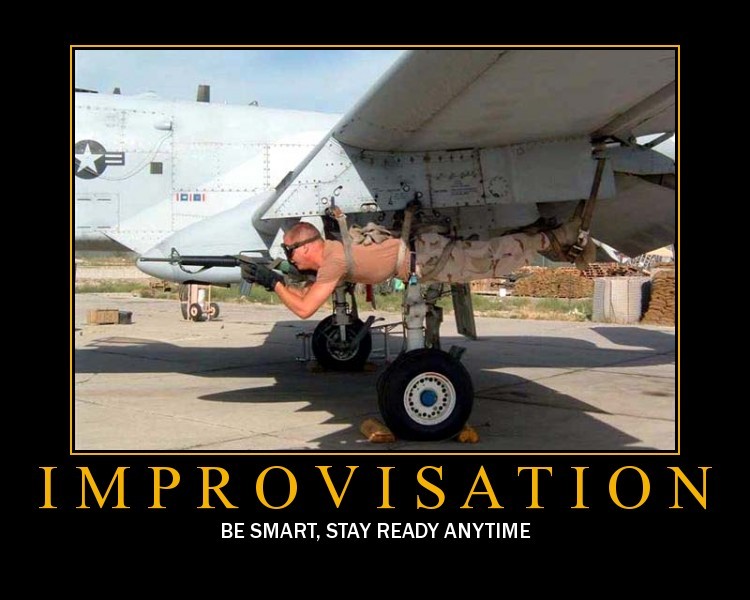 To begin with the basics, an Into to Improv, you will not be thrown to the wolves or forced upon stage until you are personally ready.  You’ll be playing games and exercises that emphasize listening and talking.  The people with you, taking the class, are in the same boat–they are just as unfamiliar.  Soon, you’ll be playing the same short form games as they do on Whose Line is it Anyway?, which are the building blocks for long form improv.

But I’m not going to get ahead of myself here.

The Syracuse Improv Collective (SIC) is over 2 years old and is made up of about 15 people.  The instructors have experience in drama.  Some have been performing improv for at least 10 years.  Some have been performing improv for over 15 years.  Short form and long form–they’ve performed them extensively.  The instructors have performed throughout the United States, and have taken classes through and–to name a few–are associated with The Annoyance Theater, The Second City, and Upright Citizens Brigade Theatre.

All of the classes we offer are only $75.  If you do a quick Google search, you’ll see that this price is amazing.   The SIC wants more people involved with improv, loving improv, and performing as part of the collective.

Improv is a creative outlet.  Bring yourself and what you have to offer.  Generate the stress and emotion you have into dedicated characters while creating this play from a simple word of inspiration.

Come do improv.  We will support you.  Bring a friend, because you’ll be that extra support for one other (and that’s important).  Come make friends, build friendships.  Practice and have fun.  Come learn something that you never though you had in you all this time.  Come see a hidden gem of the Syracuse and Central New York performance art scene.

2 thoughts on “The Gift of Improv”

After stopping by Sugar Top Bake Shoppe (@sugartopbakeshoppe) as a split decision and finding out she had my treat in stock, my originally scheduled post was put on the back burner.
Whitaker says: Double-boop the nose for good vibes and an awesome weekend.
Mum loved our Dog Mother’s Day gifts from Grounds & Hounds (@groundsandhounds).
Now brewing: Cracked Bean Roastery (@the_cracked_bean_roastery) Ethiopia Yirgacheffe
After revisiting Green Hills Farms’ (@ghfarmscny) apple fritter, I remembered why this place is top notch. Aside from having one of the best apple fritters in the world, this local and independent maker in Syracuse is magical. It’s larger than it looks. The shelves are packed. There are aromas galore. Sure some things may slightly more expensive than the typical chain grocer, but who cares? Look at Wegmans — they up their prices on crap goods, shrinking portions, and lackluster quality. Green Hills spanks the store on the butt and says to get a move on.
Celebrating my favorite little dude. High-five for turning the big five today.
Stop and smell the flowers.
Aesthetic [or] Mirror selfie — Southern Fare, Oswego
Morning run discovery — Sedgwick Farm, Syracuse