This week is definitely entertainment week.  I’ve been working on a music-related post (a two-part segment, because one post will be just too long), but these movies must be reviewed.  Last night, the opportunity to finally see Adult World came to a local venue, and I accepted the viewing.  The sacrifice to watch How I Met Your Mother was passed up, and the Syracuse University game was sacrificed as well; the two-point win proved that missing out on unneeded stress isn’t such a bad thing.

Sacrifices must be made through life.  Granted these are trivial, but they were worth the discard.

This picture was filmed in Syracuse, New York, the home of yours truly and other WordPress bloggers you enjoy:  Jim McKeever; Mark Bialczak; Jared Paventi;  Mark Strong (not WordPress, but you should follow); and Mark’s better half, Kerrie.  There are plenty more of us around, but there is only so much room for me to ramble.

The Adult World movie poster, featured at the top, was taken from it’s Wikipedia page.  IMDB doesn’t allow you to snag such pictures.

For the nth time this year, another venture to The Palace Theater was in store for this guy and his mom.  Yep, mom and I hung out last night, and I’m proud to be that Italian son.  Keep in mind the preferred designation is Son of an Italian Woman and not a mama’s boy.  There is a difference.  Regardless on who went or didn’t, The Palace Theater is becoming my Venue of Choice this year.  Last year was probably The Westcott Theater (don’t worry, I’ll be attending shows there).  Be sure to check out The Palace’s website to see all the great events lined up this year. 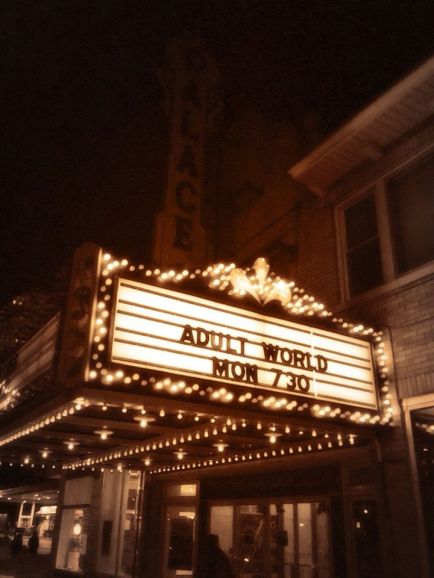 The film stars a very favorite of mine, John Cusack, Emma Roberts, and Evan Peters (American Horror Story).  Cloris Leachman plays a very small role as one of the owners of the sex shop, Adult World.  The actors and actresses in the supporting roles are all known by their faces than names, playing in so many films and television shows you have enjoyed, so check them out at IMDB.  You’ll be surprised, pleased.  In my opinion, the cast is clutch for this independent film.  Yes, a lot of them are character actors, but these were smart choices.

Adult World takes place over a year, highlighting Amy (Roberts) and her struggle as beginning writer.  After graduating from Syracuse University, Amy’s delusion of life is emphasized by her trying to find herself.  Despite having great intentions and possessing drive and the potential to do well, she is facing the reality that everything isn’t just handed to you and you have to fail/be rejected in order to thicken your skin (to the point where Syracuse winter cold cannot) and find yourself–voice and purpose.  Her debt and the cost of submitting her work builds to the point where she forces herself to take on a job:  at a sex toy shop.  She finds a book of poetry in the car, and the author is Rat Billings (Cusack); she becomes obsessed with his work and forces interactions with Billings in order to become his protege.  He unwillingly takes her on, but doesn’t care; he’s brutally honest with her, which entails constantly belittling her.

The story blooms from there.

Peters and Roberts are great together, and I can’t wait to see what these two will be doing in the future.

Adult World, of course, is designated for two purposes:  Amy’s graduation and entering the next phase of her life and the sex shop she works at, meeting Leachman’s and Peter’s characters.  For those not in the Syracuse area there is actually an adult venue called Adult World, but it’s not on the Northside, where the movie’s shop is located.

Another Syracuse blogger, a blogger currently in North Carolina, is Chuck Fiello, Jr.  Chuck’s WP blog, Syracuse State of Mind, contains the thoughts of a gentleman staying true to his roots.  Last night and after the showing, he tweeted at me and asked how the movie was.   I told Chuck that it was raw as independent films should be, imperfect, funny, and delightful.  Syracuse is another adjective that I used, but I’ll get to that in a second.

The movie definitely had mistakes.

The story is basic, which is fantastic.  You don’t need an over-elaborate plot to tell a good story.  The characters are relative, their personalities exude honesty.  The humor is not forced at all.  Despite the movie being highlighted as a comedy, it’s not.  There is a fair amount of drama, issues we have all faced in some form or another, and the humor comes out naturally.  The actors and the writing make a dynamic team, a valiant effort in regard to playing it all out.

After the film:  a grand round of applause.

On a scale to five, I’d give the film 2.8 stars.   It’s better than average, but it’s not an award winner.  I’m going to definitely buy it when I see it on the shelf of The Sound Garden.

Lastly, it’s very comforting to see Syracuse in the movies.  We have a photogenic city, and our surrounding suburbs continue to exhibit this appealing persona.  Our city has several small nooks that add as much character as the more familiar sections.  I’m proud.  I’m pleased that our potential was seen and utilized.  Thank you again for the crew and cast  for their roles in this, and we hope they enjoyed their stays here.  An applaud goes out to the studios of Treehouse Pictures and Anonymous Content, and  IFC films for distribution… what else can be said?