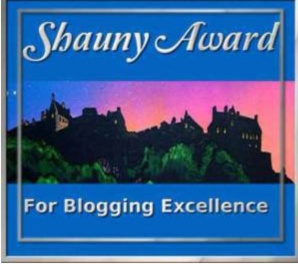 Mark Bialczak has nominated me for the Shauny Award.  He’s a pretty good guy if I do say so myself.  He’s a glass half full kind of guy.  He knows music, and can write about pretty much anything under the sun.  He can take a mean selfie.  His beard is majestic.

Despite the CNY Blogger community bringing us to the same rooms around Syracuse, his efforts through WordPress has allowed myself and several of you to get to know him.  If you don’t know him yet, you will want to.  He’s a charismatic guy, and gives great insight.

So thank you, Mark, for nominating me for this award, so I can pay my appreciation forward.

About the award and its rules are as follows, no give-backsies (obviously), and I tried to not replicate Mark’s nods:

The Shauny Award. Was created by Dr Rex who created this award to acknowledge the efforts and multiple contributions that a lad, Shaun Gibson, has shown since he started blogging in the WordPress platform. You can find more information at

The rules of acceptance are:

Show Humanity, Show Love, Be Yourself, Don’t Be Others, Don’t Gossip, and Share This Award with 10 others.”

My 10 nominees for this award are:

(I know some don’t partake in such awards, but… heh.)

http://intothebeauty.wordpress.com/about/
(Lara’s taking a break, but she deserves cred)

21 thoughts on “The Shauny Award”

Latest review for Oswego County Business Magazine features Buck’s Family Restaurant in Williamstown. The small town eatery in the Tug Hill Region can be missed if you blink. Like many restaurants in the region, it caters to locals, provides relief and nights off from cooking on hot summer nights, a spot for year-round visitors, and a warm stop for snowmobiles (and their riders).
I typically do not go to Walmart but I was in the area and figured why not. Turns out they do have apple fritters. Although they don’t sell them individually, they’re sold by the half-dozen for $2.97.
Missing live music something fierce. — Woody Pines at Nelson Odeon, September 2019
More sunset and lighthouse photos. One of the best spontaneous detours ever to Bass Harbor Head Lighthouse — Temont, ME
My latest review at CNY 55 exposes the deliciousness, cleanliness, and Irishness of Kitty Hoynes (@kittyhoynes). The dignified pub in Syracuse continues to add to the Central New York food and hospitality realm, even during this pandemic.
Bass Harbor Head Lighthouse — Tremont, ME
For this #FritterFriday, I’m getting this one done and over.
When in Bangor...
A Cadillac experience and views — Cadillac Mountain, Acadia National Park, ME