As usual, I’ve been picking up and thumbing through the E. E. Cummings collection of poetry as usual, taking time and appreciation with it. Of course, a few of them give a metaphorical slap of inspiration, convincing the desire to write something. It’s important to keep in mind that we have our own voices, which should be embraced and worked with and on, and trying to take on another person’s voice or style doesn’t do any good.

A gentleman was met once, who had a unique accent, one of the many that can be found here in The States. He was asked of his origins with great consideration to how he spoke. He said that it was an accent he’d been working on for years. Being from upstate New York, he wanted to try something (completely) different, and the result yielded an accent that is so nonsensical. The pitchy one-step-below-Boston accent gave/gives a notion that he may break out into speaking Yiddish at any moment. He could have been a past circus announcer. 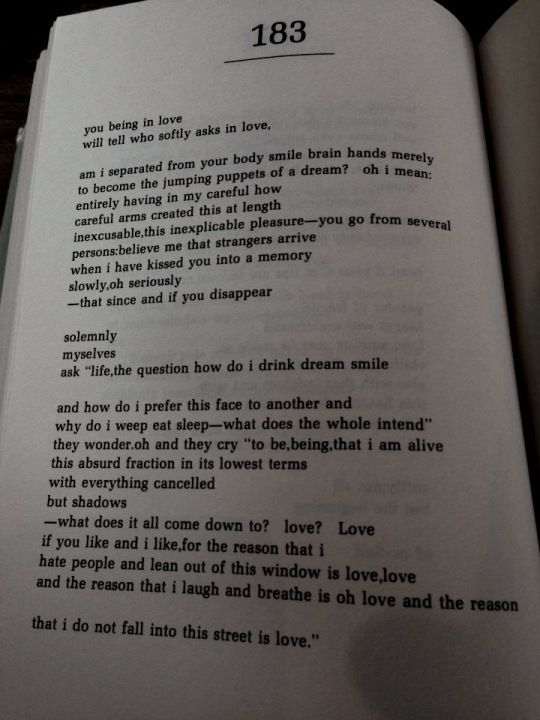 It is partial jealousy that my ability to colorfully write cannot compare to The Greats, those who have paved the way with literature, and we find ourselves here today with anticipation of joining the contemporary greats on that paving crew. There is doubt in a mind that prevents progression, which is resistance and procrastination and hesitation and any other negative word.

Yet, we writers — those who know that can write, those who want to write — keep going. It’s not about thinking, but doing. Because, most of the time, those who think they can write … well, they can’t.

This goes for the same people, who think they can write and publish a novel in one month. No. This is the difference between crap and quality.

Oh, Chris, it’s about writing the novel, not publishing it in a month’s time frame.

Oh, but it is. It should be. The point of writing a novel is to publish it. A novel isn’t fully written or complete when you have no one look at it aside your own eyes. It’s not edited two or three times? The novel’s parts are not reworked six or seven times? It doesn’t say much for the person, who writes a novel in a month’s time and does nothing with it except just to say.

Inquiring minds ask, “Where is it?”

That great Muse pokes its head, her head in my case, in the room and over my shoulder to check on me from time to time, lighting a fire under my butt to get my hands and fingers moving. Sometimes she takes the form of an actual person, which is interesting. She only shows up for a split second, and she cannot be recognized in a line up.

Her help is especially encouraged when writing about a people, women in particular. The latter is difficult. When you do it right, there is significant reward for it. And she, the woman, whether you’re basing a character off of her or writing about her, love it.

In the recent past, I was blatantly hit on. With picking up on these instances of getting hit on, I’m more oblivious than anything else. Sure it was complimentary, but seeing someone at the time allowed me to keep my mature A-Game mentality on and resist the blatant slather of trying too hard. Imagine watermelon pieces flying at you during a Gallagher show, but you forgot to bring your protective plastic bag garb that day. The girl holding my interest was behind me, and she was talking to friends; despite my trying to get her attention without disrupting the conversation, I held my ground.

The rough-around-the-edges pursuer asked me what I wrote about, where I wrote, and what the chances are — after her inquiring mind found out that I wrote about life and pursuit of various things — that some random person I spoke to would find themselves captured in the words of a post, if she would be featured. She has her 15 seconds here, obviously. I told her it could most likely happen, equally for better and for worse. Should timing have it, her friend left at this point; so, at this moment, I turned around to see if my interest was available to talk to and easily let me segue out of there. Nope. My hand was kept by her, however, should she feel free to grab it at any moment.

When my attention focused on the passerby, I was fearful that she was going to pull out her B-Game (Bastard Game) to rope me in, so I pictured a shirtless Seth Rogan rubbing his nipples, standing in her place. Since I couldn’t find a gif of that, I came across this guy caressing his beard for emphasis. I’m sure the other girl got the picture when/if she saw where my interest lied later that evening.

It’s a touchy subject: writing about women. Women love it or hate it. The romantic women could feel adored, because they were included in even a sentence. Women, who have done wrong or acted rude, may regret what they were captured doing. Feminists may feel attacked if any of us male writers write something negatively; however, if we capture a negative aspect and write it truthfully as it happens, how could we be doing wrong? Feminists may also say that they don’t need us men writing romantically about them. The same thing would go for us men. If a guy screws up, and I see it — well, it’s fair game to be written about. Regardless if I know the person or not, I’m not going to include names.

But who doesn’t like to be praised? Who doesn’t want to be emulated through a character in a story or anonymous being in a poem? I don’t write offensively toward or about women, and I don’t plan to. The other woman from the scenario above was not attractive, in my opinion; even if she was, I wouldn’t have left my interest’s side. This new one, well, she’s a catch. I’m not that type of guy for tomfoolery, adultery. However, if I’m at a restaurant, let’s say, and a woman’s date going to the bathroom leads to her making sure the coast is clear, stepping away from the table to smooch the bartender … Well, Then what?

I love the human race, all of our flaws and our successes.

that i do not fall into this street is love.”

(and she calls me out when i’m such a klutz, and i like that)