Last week, a stop in Cleveland proved to be much more worthwhile than a break from driving. The intention was to stop in the Cleveland Flats, a redeveloped urban area pumping veins that are the Cuyahoga River and Old River, and grab a bite to eat at one of the brewpubs. Collision Bend Brewing Company caught our eye, especially with the food menu.

The city of Cleveland is pretty easily navigatable. There is plenty of fun to be had in the urban neighborhood, especially when it comes to nightlife and arts, plus there are establishments to satisfy the taste buds of foodies and beer snobs, and let’s not forget an outdoor bocce ball-focused bar and an aquarium.

Also, the Cleveland Browns‘ FirstEnergy Stadium and the Indians‘ Progressive Field aren’t too far away.

No matter how far a person travels from home, there is always a connection. Whether a person from Liverpool, NY, is taking your photo at the cupola of St. Peter’s Basilica, finding out a relative’s past university roommate is someone you went to high school with, or someone on a London lift wearing an Earth Crisis T-shirt. 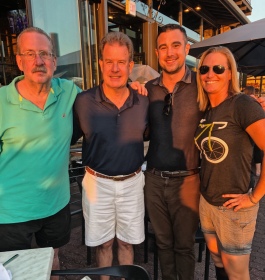 Some of these familiarities are not as obvious as others, but they’re there. After taking a photo, a person has to put down their phone and pay better attention. (Sorry, not sorry.)

Katey and I met up with two of my uncles, my father’s brothers in the younger half of eight kids, at Collision Bend Brewing Company for a quick bite and to catch up. I haven’t seen either in what feels like forever, so the timing was perfect, albeit set up while on the road.

In March 2018, Collision Bend Brewing Company was voted the top brewpub in the nation according to USA Today’s “10 Best Reader’s Poll.” The city of Cleveland came in fourth for overall beer scene.

Collision Bend is a two-floor restaurant with a wonderfully scenic view of the Old River. The brick and the brightly painted wood accented facade is welcoming, and walking through the door leads into a spacious first-floor, industrially decorated dining area with a patio in the back. The back of the building feels reminiscent of a New Orleans business or residence and complete with a second story balcony with an iron railing.

Eating on the patio — we got lucky — reminded me of eating at Alex’s on the Water in Oswego, NY. I recently wrote a review of the restaurant for Oswego County Business magazine; the article can only be read by online subscribers. The patio of the “Port City of Central New York” restaurant has its distinct similarities. Both present great views of a river, and on the opposite side of the rivers are outdoor concert arena complete with those distinct white canopies.

Better yet, take a look at these photos. More words to follow. This is an intermission.

Also: “cleveland.com” and “syracuse.com” are owned by the same company. Or both chose a really popular news template.

I should have taken more pictures, especially of the food, but I didn’t. The time was definitely dedicated to catching up with my family and allowing them to meet my partner in adventure.

As Katey and I split the Bollard Pull (American porter), we kicked off the meal with two small plates. Collision Bend’s menu is eclectic with several small plate offerings, salads, pizzas, and large entrees.

The Welsh Rarebit is a semi-thick beer cheese accompanied with flatbread triangles. The flatbread is typical, but the cheese sauce was something to take note of. It was very flavorful. The Asian style arancini Siciliana came out as five or six golf ball-sized fried rice balls. Ginger lightly knocks on the taste buds, and the wasabi mayo was awesome. The amount of wasabi flavor was enough for fans, but not overwhelming for those who aren’t the biggest fans and a gateway style for people looking to try it.

The Malones proved we were great eaters that night. Pat ended up ordering the spaghetti with the giant cheese-stuffed meatball. He crushed the entire plate. Rob and I both opted for the roasted eggplant melt, which proved to be one of the best decisions ever made. I split mine with Katey, because she split her roasted cauliflower pizza.

The pizza wasn’t huge, definitely a shareable side or a snack at best, but it was delightfully packed with flavor, validating my continued love for cauliflower or “ghost broccoli.” It a white pizza with just enough oil and garlic. The capers and pickled pepperoncini were the accompanying ingredients. The gouda and fontina cheeses definitely topped everything off.

At the bottom of the plate sits a piece of perfectly toasted wheat bread. Thrown on top of said toast is a generous handful of fries. To go along with a generous portion of eggplant are shiitake mushrooms, roasted red peppers, and hot potent pickled peppers. Yes, that’s melted aged provolone gratin style. Throw in basil aioli and shredded leaves to the top.

The last time I was in Cleveland was 23 years ago, for a wedding. This little taste of what the city has to offer hit the spot. Although the city is a bit larger than that of Syracuse — a 385,525 versus a 143,396 population (2017 Census) — there was a good hometown vibe to it aside the central New York similarities pointed out earlier. We’ll be back soon-ish to hit up Progressive Field, to check off another stadium off the list.

Feast at the Beast — Noble Beast Brewing, Cleveland
Other People’s Pets: Kira
Whitaker’s new album drops next month.
Camp vibes with my three favorites.
Part of a lovely day in Skaneateles with my boy.
Hey, Port City Copy Center (@portcity.copycenter)! Thanks for helping with the great invitations. They look amazing! To think I would have had to draw them by hand…
Happy National Puppy Day to this pure-hearted pup.
Happy World Down Syndrome Day!
Bright and sunny. — Soleil Café