On Saturday, March 30, Katey and I were able to check off our sixth major league baseball stadium at Yankee Stadium in the Bronx. It was my first “opening weekend” game ever as the Bronx Bombers took on the Baltimore Orioles. We ended last season with a visit to Baltimore in September for our fifth stadium.

Although the damn birds took this game, albeit a strong ninth inning effort by the Yankees, it was wonderful and comfortable to be back at home base. (Katey is a Detroit Tigers fan for some reason.)

Remember, we took in the Baltimore-born Babe [Ruth] as our own. 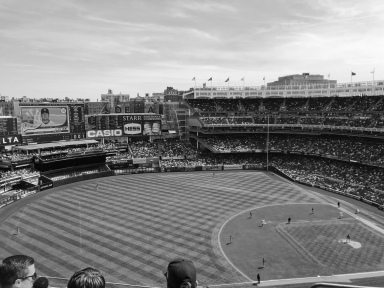 There is always a subconscious countdown to opening day of baseball season. There is a lot to be excited about. Baseball is definitely the United States’ pastime. It’s the signifier of pleasant weather ahead, at least for the northmost states; although, Central New York is battling a case of the residual snowflakes.

The drive home last Sunday took only a handful of hours, but the accompanying weather made it feel like it was a Monty Python-esqe year-long ordeal — spring fever in Jersey City, haze and summer morning humidity in Ramsey (NJ), a cool autumn feel in Mountain Top (PA), and it was snowing by the time we hit Cortland (NY).

But the sun was shining on The Big Apple.

We took the ferry from Jersey City, which was a great idea. Although I love staying in New York, especially Brooklyn, the boat was a convenient trip to Manhattan. Katey’s friend was celebrating a milestone birthday as well, so “Dirty Jers” was a clear option.

I’ve enjoyed the New Yankee Stadium as an adult as much as the old stadium as a child. Yes, the wear-and-tear was definitely noticeable. Plus, the Yankees, being the organization they are, want to make some more moolah.

The only thing I really dislike about the stadium is the food. Maybe I didn’t look too hard, but any stadium patron shouldn’t have to. Boston, Detroit, Baltimore, and Los Angeles (particularly Dodgers Stadium) all had these stadium standout food options. Yankees need to work on that.

We opted for a standard Nathan’s hotdog ($5.75); a classic sausage, peppers, and onion ($8.75); and a bag of popcorn ($7 and change). Nope, no beer. Food was on the minds, and Yankee Stadium wasn’t pouring any craft beer we hadn’t had before.

There is a debate to be had between the downstate Nathan’s and upstate Hofmann’s. On a personal note, I enjoy both. But I’m a Hofmann’s guy 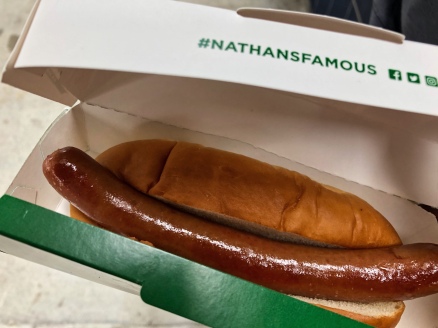 On the left is a Hoffman’s mixed double at Heid’s of Liverpool, NY, which is a coney (white hot dog) and a standard frank. On the right is a Yankee Stadium Nathan’s Famous. Nathan’s Famous originates from Brooklyn, where Coney Island is. There is no correlation between the coney dog (veal, pork, egg) and the island of fun.

Appearance wise, Hofmann’s dog has more girth. It looks like a standard hot dog. Nathan’s product looks long and wimpy. Looks, however, are deceiving. The latter/downstate dog is still a snappy dog. I’ve never dismissed the crisp snap of biting into a Nathan’s, which is flavorful. The Hofmann and Nathan dogs are distinct in their own right — try them because, truth be told, they can’t be described. Nathan’s don’t have coneys, which does put them in a slight disadvantage despite doing what they already do right. But, New York state can boast about having three great hot diggity dogs.

Unfortunately, there’s The Great Outdoors and the “lips and assholes” quote.

The sausage sandwich was pretty darn good despite its lackluster appearance. The classic sausage with peppers and onions looked gloomy in all honesty. But the sausage was flavorful and the veggie friends, albeit coated in oil, were near perfect.

The service at Yankee Stadium was the worst. The vendors were cliche — as slow as molasses. There were multiple lines at the sausage stand, and an inning had passed while waiting in line.

Katey and I broke apart and stood in different lines. Whoever got to the counter first “won,” and the other bailed their line. Katey arrived at the counter before I did, but that still doesn’t say much.

The popcorn line, which was one line only, took less time.

Plus, the popcorn, which cost about a buck less than the sausage sammy, was worth the money with consideration to the amount.

Regardless of the food, it was great to be back. Watching the Yankees live and in person is reliving another part of my childhood. Although he passed before we went, my grandfather was there. My grandmother is always there. My paternal grandmother especially, but both of them are there with me.

The first game I saw was against the Tigers. The second was against the Royals. And my partner is royally dedicated to the Tigers. It’s fitting. Now that we’ve checked off both of our stadiums, we can frequently visit as “one-off” games, not having to wait until we complete the entire stadium list.

One thought on “Primed and Pinstriped”

Morning vibes.
Pit stop at one of Whitaker’s favorite “brew houses” in the neighborhood. — The Cracked Bean Roastery
Latest review at Oswego County Business Magazine features Red Sun Fire Roasting Company in Oswego.
When people ask why you’re a little Saucy in the morning.
Ha’Penny is what’s ha’ppening.
Gritty competition — taste versus presentation. My wife gets all the credit.
Sunday morning vibes. It’s gotta be the sauce.
Happy National Dog Day to our little champ, our sweet boy, our Whitaker.
Other people’s pets: Ruby