The delight of going through album after album.  The process was emotional, it has to be admitted, as much as it was personally rewarding.  I’ll do my best to not repeat. 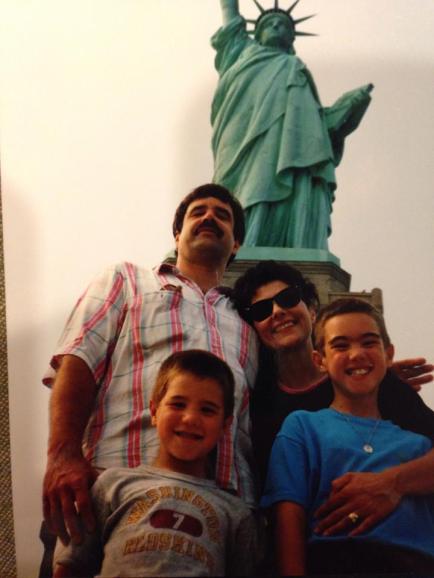 This next picture is eerie, this picture of the Twin Towers.  The emotion generated at the dining room table was bittersweet.  It was the first time we, my brother and I specifically, had seen them and from a distance.  We–my family, my Uncle Pat, and Grandmother–took the ferry to Ellis Island, where the picture just above was taken.

I remember the day clearly, but there was uncertainty as to when this was taken.  At one split half-second, the uneasy notion that this was taken in September came and went.  It was passed off, and the pages of the album were turned with the sound of breaking static Velcro with each separation.  However, the notion came back, and the picture was revisited; it was taken out of the sleeve, and turned over.

My heart sunk at the fact this picture, this trip was taken 10 years before the devastation that was September 11, 2001.  This was 10 years before college, so I was 8 at the time.  No thoughts of the future ran through our heads, and this assurance can be spoken for everyone.  Who would have thought that our country would be attacked 10 years down the road?

This picture was quickly thrown out to the world via Instagram and social media outlets, because I couldn’t wait until September.

The guy above, jamming away on the accordion, is my Pa.  This ventures over to my mother’s side of the family, but I felt it necessary to include this picture.  He’s my grandfather birthday buddy, and he was taken to a better place a month before I was born.  It was 31 years to the day on Tuesday, the night that the photo albums were found, that he passed away.  It’s fitting that all of a sudden this urge came over me to find that picture for my friend’s birthday.  There was determination with my intentions.

This is my late Aunt Anne, holding the infamous green bat that was mentioned in this November post.  I made a promise to post the pic, which I incorrectly remembered on all accounts.  Perhaps there is a picture of her playing with us, but this is more than satisfactory.  Save the notion that her husband, Michael, the guy with the boss car in the post, was the guy who sang “The Theme from New York, New York” at my Aunt Elizabeth’s wedding.  Here…